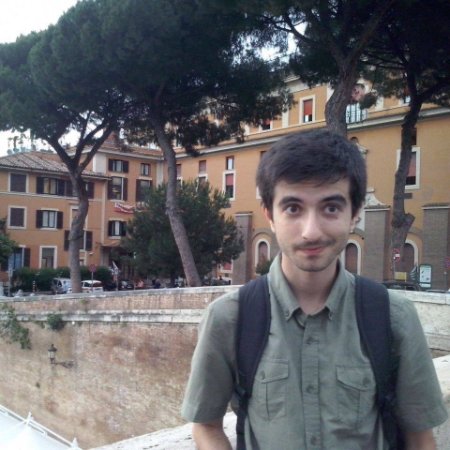 DDE, or Dynamic Data Exchange, is a legacy interprocess communication mechanism that’s been part of some Windows applications since as early as 1987. DDE enables applications to request items made available by other programs, such as cells in a Microsoft Excel spreadsheet, and be notified of any changes within these items.

Read a blog by Philip on a vulnerability with Excel 4.0 Macros.

The DDE mechanism has appeared in recent discussions on how to carry out macro-less code execution in Office documents. This technique works by making Excel (or other MS Office applications) evaluate an expression ("=cmd|' /C calc'!A0", for example) that requires data to be transmitted via DDE from another application. This allows an attacker to specify an arbitrary command line as the DDE server to be run, thus performing arbitrary code execution.

https://sensepost.com/blog/2017/macro-less-code-exec-in-msword/This functionality is implemented in the background using a method called DDEInitiate, which is exposed through COM. This made me wonder if the DDE functionality in Office applications could be used remotely through DCOM in a manner similar to the techniques described by Matt Nelson of SpecterOps (here and here) by trying to call this method through DCOM.

A quick look at the methods exposed by the Excel.Application object shows promise.

Indeed, the DDEInitiate method exists and is even documented by MSDN. 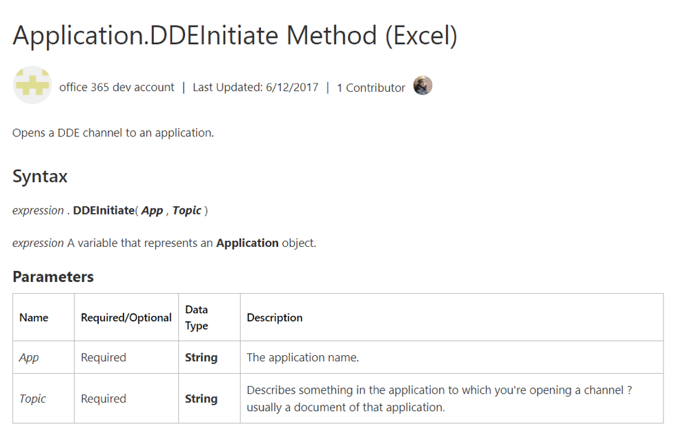 We may supply "cmd" as the App parameter, while the Topic parameter will be any chosen command line arguments.

This method is not without its quirks; it limits the App parameter to eight characters (no directly calling PowerShell for you). But the Topic has a much more manageable character limit of 1,024, which is imposed by the CreateProcess function. Furthermore, the method appends ".exe"  to the App parameter, so "cmd.exe" tries to run "cmd.exe.exe", which will obviously fail. 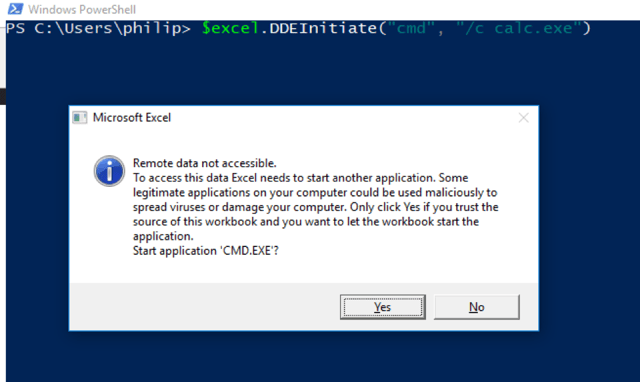 Initially, things didn’t go as I hoped. Clicking "yes" indeed spawned a shell that ran calc, but this isn't much of a lateral movement method if it requires a user on the victim machine to interact with this extremely suspicious alert (especially if they didn't even open Excel). We need to look at the DCOM object again for assistance.

The DisplayAlerts property looks very promising, and playing with it gives good results. 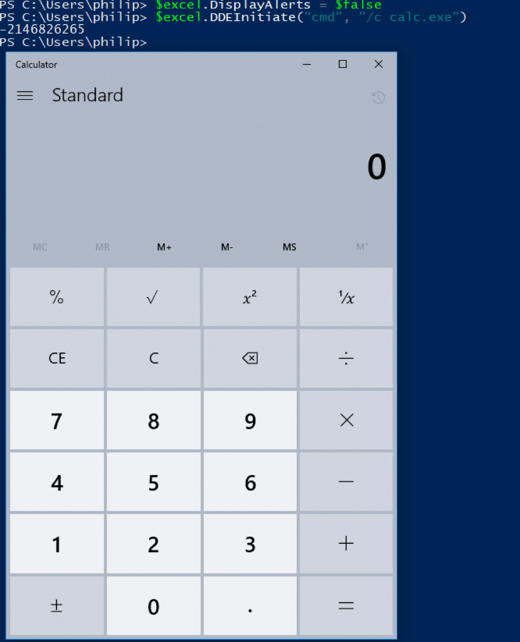 It seems the DisplayAlerts property controls the alert presented by DDEInitiate.

Sadly, while some other Office applications, including MS Word, do expose the DDEInitiate method via DCOM, I have not been able to get it to work on anything but Excel.

While all of this was done on a single machine, getting this technique to work remotely can be done by simply replacing

Now all we need to do is replace the command line with our favorite PowerShell download cradle, and we're good to go with our new lateral movement technique.

Create a closed-loop, strategic security process for your defense.