Conti is a relatively new player in the ransomware field. Since first emerging in May 2020, the ransomware operators (aka. the Conti Gang) claim more than 150 successful attacks, which equates to millions of dollars in extortion fees.

Like other ransomware syndicates that have emerged recently, the Conti gang follows the growing trend of double extortion: they steal sensitive files and information from their victims and later use it to extort their victims by threatening to publish the data unless the ransom is paid.

Emerging Threat: In a short amount of time, Conti ransomware has caused a great deal of damage and made headlines across the world.

High Severity: The Cybereason Nocturnus Team assesses the threat level as HIGH given the destructive potential of the attacks

Low-and-Slow: Prior to the deployment of the ransomware, the attackers attempt to infiltrate and move laterally throughout the organization, carrying out a fully-fledged hacking operation, or RansomOp.

Rapid Development Cycle: In just a few months, the Conti gang has released 3 new versions of the ransomware, improving the malware in each version.

The Successor of Ryuk: The Conti Gang collaborated with the TrickBot Gang, which are now using Conti as their ransomware of choice.

Spreading across the network: Conti is not satisfied with causing damage to just the infected machines. Instead, it spreads in the network via SMB and encrypts files on remote machines as well.

Similar to ransomware such as Egregor (“Egregor News”) and Maze (“Maze News”), the Conti Gang has their own website, “Conti News,” which stores a list of their victims, and it is where they publish the stolen data: Conti is a very destructive threat. Besides the double extortion that puts information and reputation at risk, the Conti operators equip it with a spreading capability, which means that Conti not only encrypts the files on the infected host but also spreads via SMB and encrypts files on different hosts, potentially compromising the entire network. The rapid encryption routine takes just a few seconds to minutes due to its use of multithreading, which also makes it very difficult to stop once the encryption routine starts.

Another major factor that contributes to the popularity of Conti is the collaboration with the TrickBot Gang. Conti is sold as a Ransomware-as-a-Service in underground forums to exclusive buyers and partners such as the TrickBot gang, which replaced Ryuk and adopted Conti as their new ransomware of choice.

In addition to the sophisticated capabilities and the collaboration with the TrickBot gang, the increased number of Conti attacks against big companies such as Advantech, which was extorted for $13.8M, and other attacks against big North American based companies as listed in this article, contributed to Conti making its way into the news this year. With a rapid development cycle that keeps the malware up-to-date and equipped with advanced capabilities, along with the promotion done by the TrickBot gang, it is no wonder why Conti is referred to as the successor of Ryuk.

From Bazar Backdoor to Ransomware

The TrickBot Gang was known to use their infamous TrickBot malware to start interactive hacking operations and deploying secondary payloads such as Ryuk and Anchor. Earlier this year, the group shifted to using the Bazar backdoor to launch an interactive attack and deploy Ryuk, and since July 2020 their new ransomware of favor has been Conti.

Although the payloads and tools of the TrickBot Gang have changed over time, the initial infection vector for the Bazar loader and backdoor has remained the same: a phishing email containing a link to Google Drive which stores the payload: 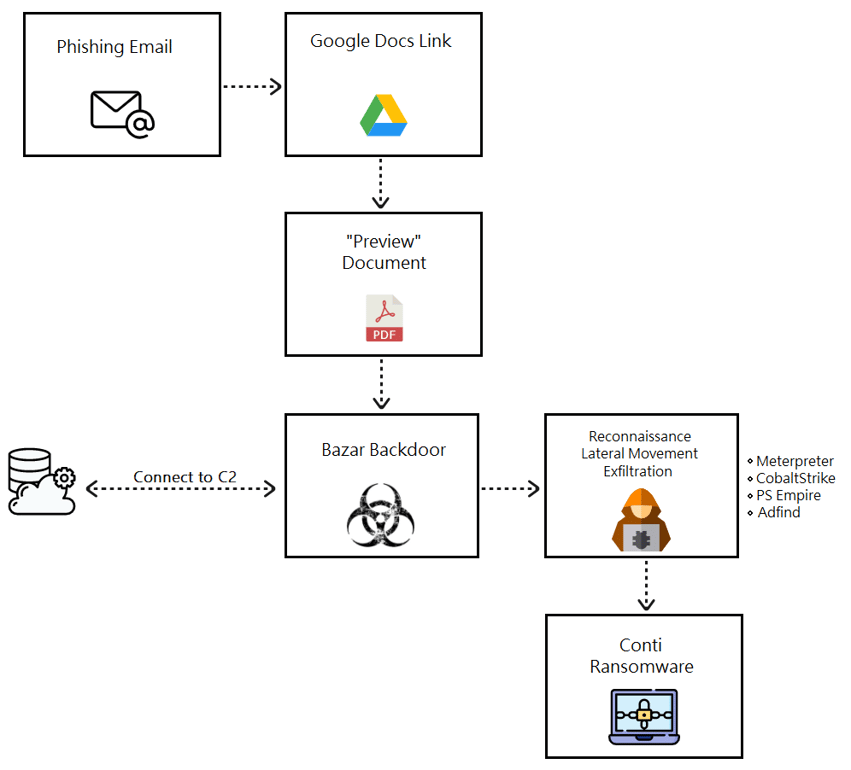 Since Conti was first discovered in July 2020, three different versions have been observed. With each new version, the Conti Gang added more capabilities which make the ransomware more dangerous and destructive. The following table summarizes the main changes between the three versions:

This section focuses on version 2 and version 3. As mentioned in the table above, version 3 has two forms - one is an independent executable, and the other is a loader that loads a DLL from the resources section and executes it. Even before doing any static / dynamic analysis, we can use VirusTotal to determine that the resources section probably contains more data, in this case an encrypted DLL that is loaded into memory:

The APIs for interacting with the resources are dynamically resolved using GetProcAddress:

Dynamically resolved API used to interact with the resources

The loader then decrypts the payload using an hardcoded key, and loads it into memory: 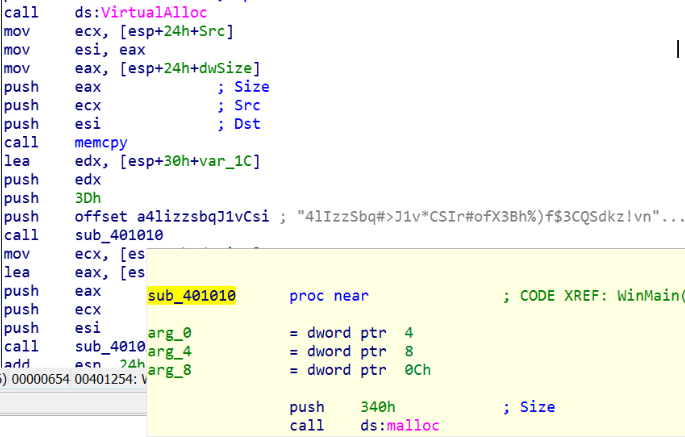 Decryption key of the Conti payload

Once the DLL is loaded, Conti starts it’s encryption and spreading routines. The ransomware scans the network for SMB (port 445). If it finds any shared folders it can access, it will try to encrypt the files on the remote machines as well:

Conti uses a multithreading technique to fast encrypt all the files. This routine takes seconds to just a few minutes depending on the number of files on the machine. Each sample has a unique extension that the malware adds to the encrypted files. While using Cybereason with prevention mode off to allow investigation of the ransomware execution, it is possible to see the encryption activity and the creation of new files:

After the files are encrypted, the malware leaves the ransom note in every folder, making sure it is noticeable to the victim. The Conti Gang usually sets a deadline for the victim to pay the ransom, and if the deadline passes without payment, they leak the victim data on their website “Conti News.”

The Cybereason Defense Platform is able to prevent the execution of Conti Ransomware using multi-layer protection  that detects and blocks malware with threat intelligence, machine learning, and next-gen (NGAV) capabilities. Additionally, when the Anti-Ransomware feature is enabled, behavioral detection techniques in the platform are able to detect and prevent any attempt to encrypt files and generates a MalopTM for it:

Ransomware Malop triggered due to the malicious activity 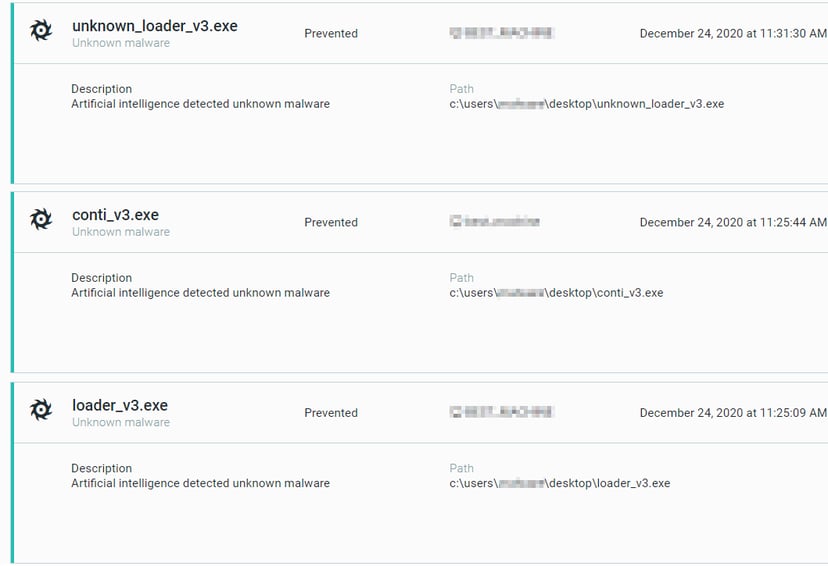 Lior is a senior threat researcher at Cybereason, focusing on threat hunting and malware research. Lior began her career as a team leader in the security operations center in the Israeli Air Force, where she mostly focused on incident response and malware analysis.