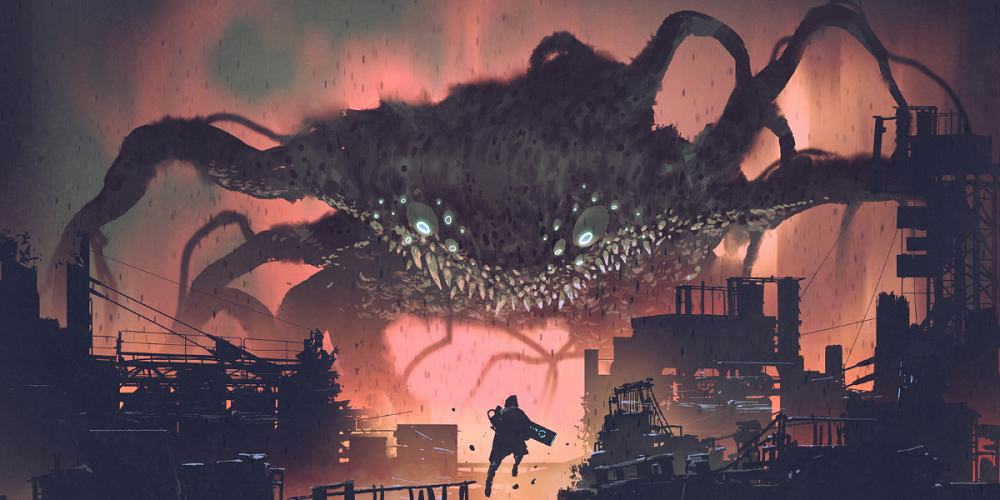 Egregor is a newly identified ransomware variant that was first discovered in September, 2020, and has recently been identified in several sophisticated attacks on organizations worldwide, including the games industry giants Crytek and Ubisoft.

Similar to the Maze ransomware, Egregor’s operators run an extortion ransomware operation, where the data is stolen and stored on the attacker’s servers before it is encrypted on the users machine. Egregor is probably the most aggressive ransomware family in terms of negotiation with the victims. Its operators give only 72 hours to contact them. If the ransom is not paid, the data is released to the public via the attacker’s website, “Egregor News.”

The ransomware payment is negotiated and agreed upon via a special chat function assigned to each victim. The payment is received in bitcoin: 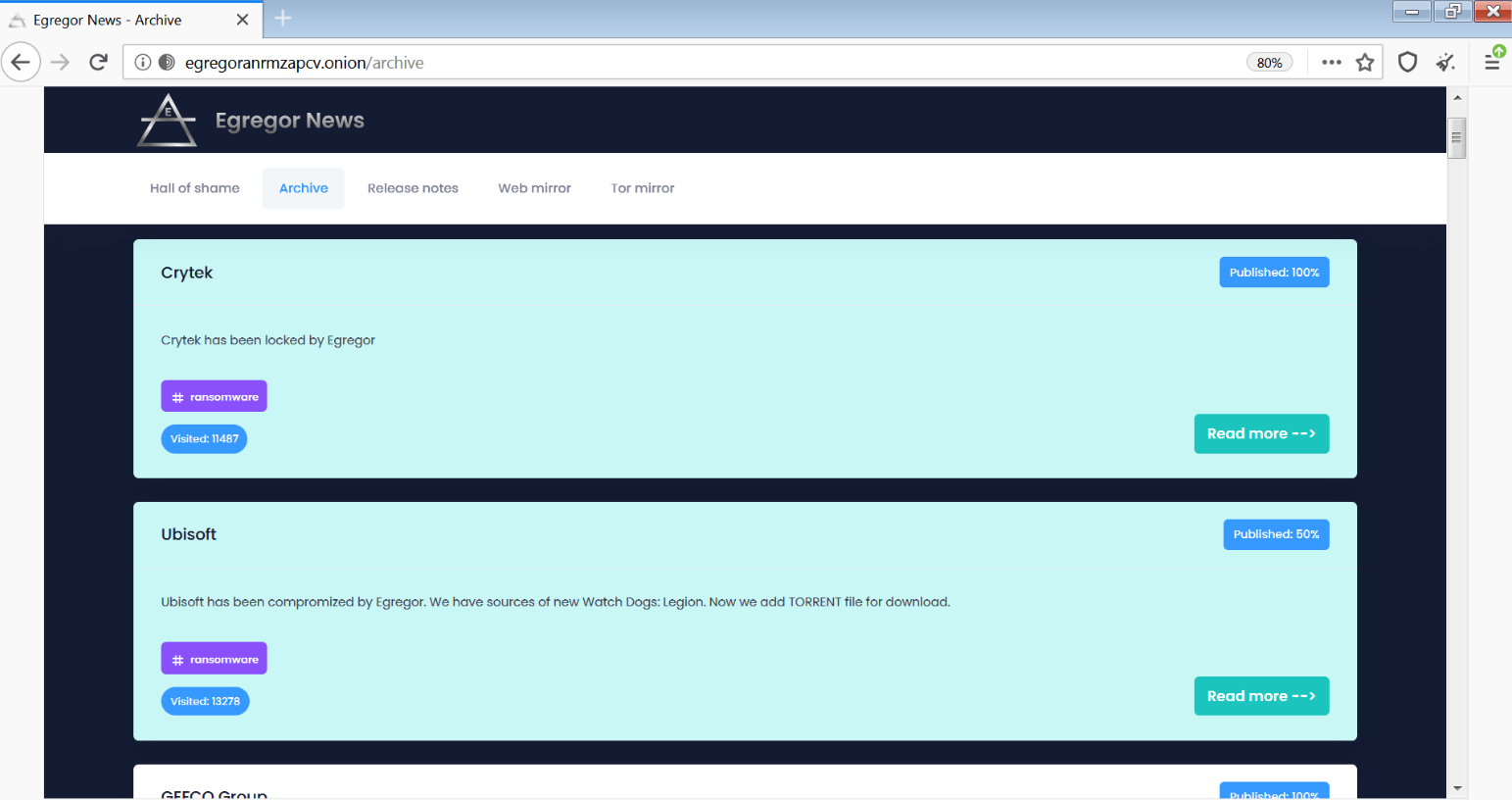 Egregor is still quite a mystery when it comes to how it is delivered in the attack and who is behind the campaign. Not much is known at this point, but speculation includes theories that Egregor is the “heir to Maze,” after that threat actor announced they were shutting down their operations in late October. This assumption is supported by the close similarities between the two - and of course the timing.

• Emerging Threat: In a short amount of time, Egregor ransomware caused a great damage and made headlines across the world.

• High Severity: The Cybereason Nocturnus Team assesses the threat level as HIGH given the destructive potential of the attacks.

• Low-and-Slow: Prior to the deployment of the ransomware, the attackers attempt to infiltrate and move laterally throughout the organization, carrying out a fully-fledged hacking operation.

• Infection Vector via Commodity Malware: The infection seems to start with commodity malware. Based on a preliminary reconnaissance of data sent to the C2 servers, the operators can choose to escalate to an interactive hacking operation, which ultimately causes a mass ransomware infection. 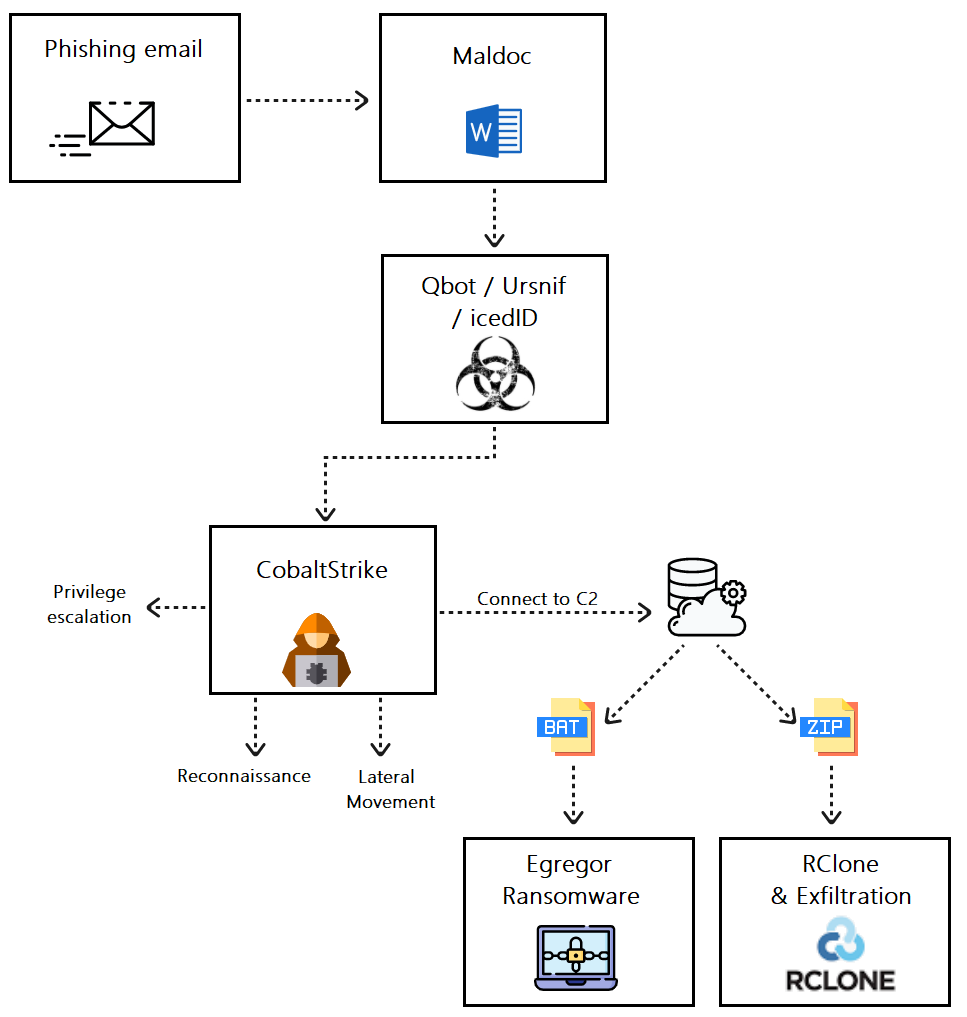 From Commodity Malware Infection to Ransomware

Since Egregor is a relatively new player in the game, not many incidents involving it are covered and detailed here, including information about the infection chain. The information available so far suggests that the initial infection starts with a phishing email that contains a malicious macro embedded in an attached document.

The macro code downloads a commodity malware, either Qbot icedID or Ursnif, which provides capabilities for stealing sensitive information that will later be used for lateral movement. This technique, which involves using a commodity malware as initial infection and to eventually deliver ransomware, was observed before with Ryuk ransomware and Maze.

Later in the attack, a CobaltStrike beacon is installed on the infected machine and the attack shifts to an interactive hacking operation. The attacker uses tools for reconnaissance such as Adfind and Sharphound to gather information about users, groups, computers and so on. This information will assist in the lateral movement phase and also in performing privilege escalation, as Egregor compromises Active Directory in order to become domain admin.

In this stage, after the malware settles on the victim’s machine, it starts communications to the C2 in order to download additional components including scripts, DLLs and other files that will be used eventually to exfiltrate data and encrypt files.

Among the dropped files observed:

VT screenshot of the RClone executable and configuration file

CobaltStrike creates a service that runs an encoded PowerShell command that executes shellcode that creates connection to amajai-technologies[.]industries: 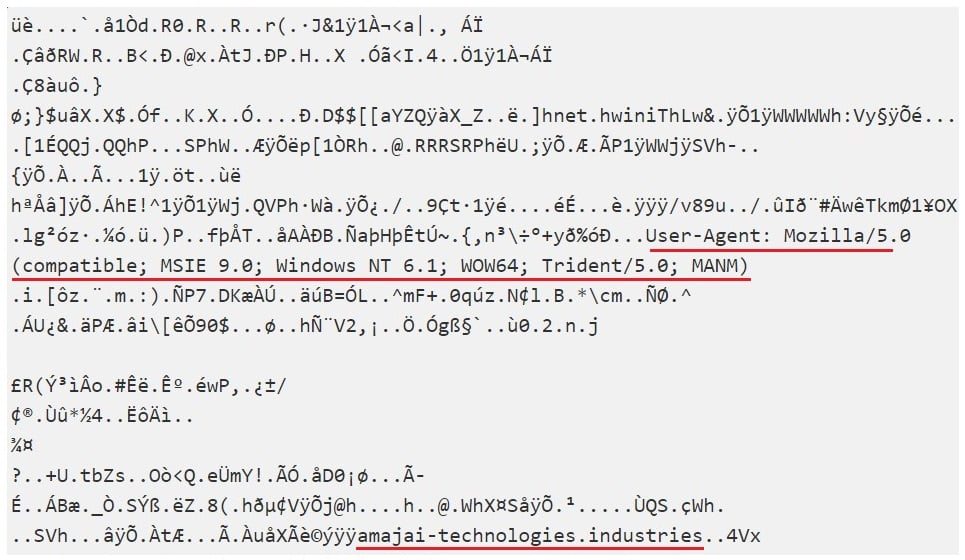 Decryption of the Shellcode

After dropping the files needed for the attack, the attackers “prepare the ground” and undertake a final procedure meant to avoid detection and prevention. The attacker creates a Group Policy Object (GPO) to disable Windows Defender and tries to take down any anti-virus products.

The Egregor payload can only be decrypted if the correct key is provided via command line argument to the Rundll32 process, which means that the file cannot be analyzed, either manually or using a sandbox, if the exact same command line that the attackers used to run the ransomware isn’t provided.

In order to execute the ransomware and decrypt the blob of code inside of it, the operators provide the batch file with the key “-passegregor10” which resolves in the ransomware running and encrypting files:

Batch file execution as shown in the Cybereason Defense Platform 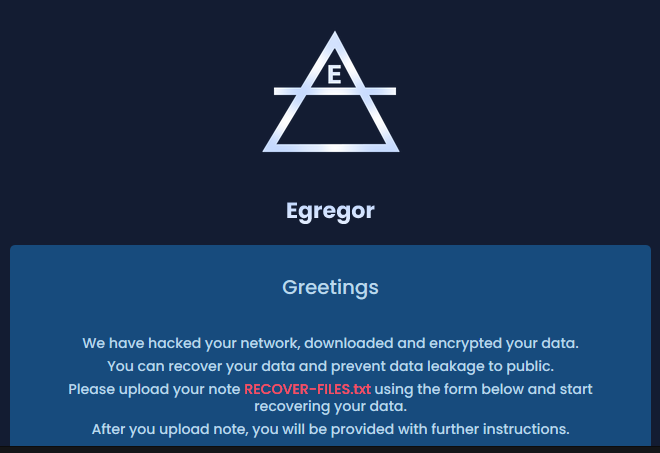 A message shown the the user

Connection to Sekhmet and Maze

Another way to search for the connection between the three is to look at the infrastructure. The IP address 185.238.0[.]233 different binaries, Zip files and scripts:


The IP address is referred to by different scripts including the batch files that download the Egregor payload: 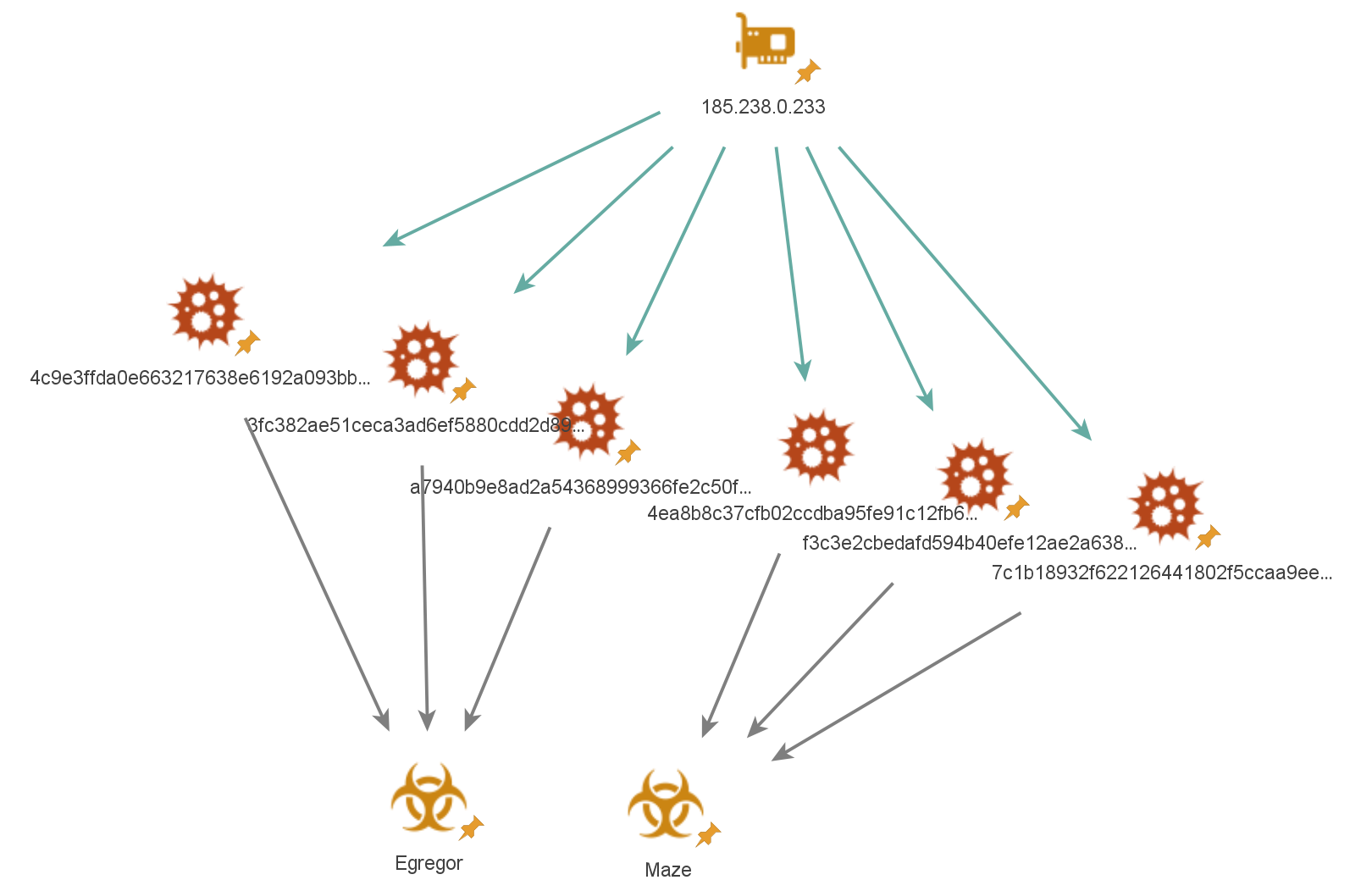 It is also worth mentioning the similarities in the ransom notes of the three. They have a very similar structure, and even some “copy-paste” parts: 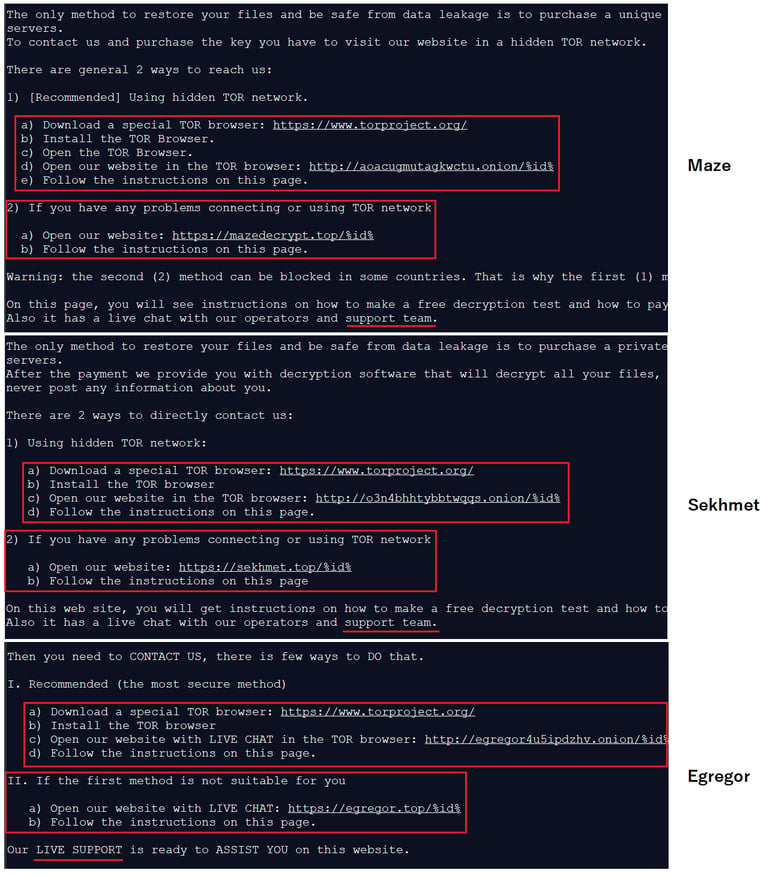 In addition to the Maze and Egregor binaries found on this specific server, other samples were found on the server, related to Prolock ransomware, as analyzed in this report.

Cybereason is able to both detect and prevent the execution of Egregor, Sekhmet and Maze using the NGAV component. When the Anti-Ransomware feature is enabled, behavioral detection techniques in the platform are able to detect the attempt to encrypt files and raise a Malop for it: 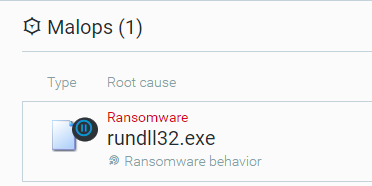 Ransomware malop triggered due to the malicious activity

Using the Anti-Malware feature with the right configuration (listed in the recommendations below), Cybereason will also detect and prevent the execution of the ransomware and ensure that it cannot encrypt targeted files:

User notification, Blocking the execution of the ransomware in the endpoint