New Betabot campaign under the microscope

In the past few weeks, the Cybereason SOC has detected multiple Betabot (aka Neurevt) infections in customer environments. Betabot is a sophisticated infostealer malware that’s evolved significantly since it first appeared in late 2012. The malware began as a banking Trojan and is now packed with features that allow its operators to practically take over a victim’s machine and steal sensitive information.

Most modern malware have self-defense features designed to bypass detection and thwart analysis. These features include anti-debugging, anti-virtual machine/sandbox, anti-disassembly and the ability to detect security products and analysis tools. It is not uncommon for malware to take a more aggressive approach and disable or uninstall antivirus software. Other programs remove malware and bots that are already on a person’s machine, eliminating the competition with heuristic approaches that would put many security products to shame. Betabot stands out because it implements all of these self-defense features and has an exhaustive blacklist of file and process names, product IDs, hashes and domains from major antivirus, security and virtualization companies.

This blog will use Cybereason telemetry data gathered from multiple customer endpoints to look at the infection chain. We’ll also delve into Betabot’s self-defense mechanisms.

The Betabot infections seen in our telemetry originated from phishing campaigns that used social engineering to persuade users to download and open what appears to be a Word document that is attached to an email. Examining the document in a Hex editor, we can see that it is, in fact, an RTF file:

Example of a dumped and decoded entry, showing a batch script embedded in the document:

Dumping each entry results in the following files, which will be eventually dropped:

Illustration of the observed infection chain: 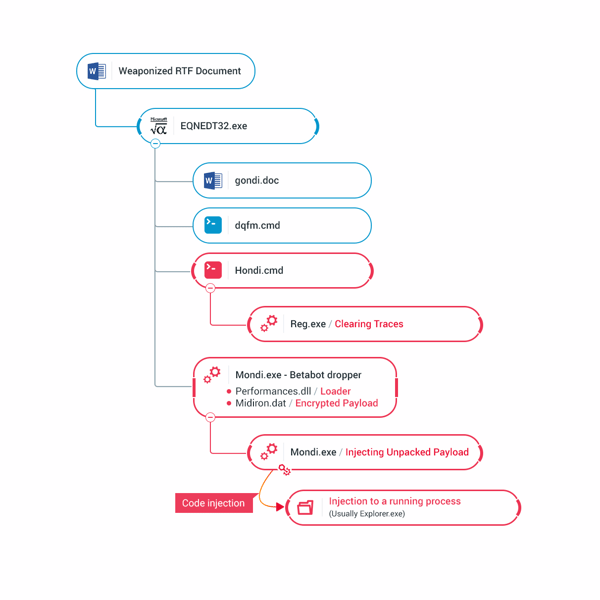 The Cybereason platform caught the exploit’s behavioral chain, as seen in these screenshots:

The installer will extract Betabot loader and the encrypted main payload:

The loader will unpack the payload and inject it into its own child process. 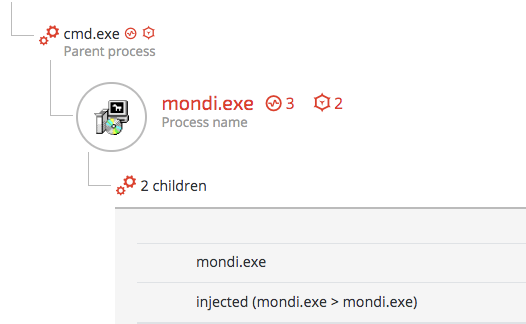 The loader child process will then enumerate all the running processes in order to find injection candidates. In many of the case Cybereason observed, the Betabot loader injected its code into multiple running processes for persistence and maximized survival purposes. If an injected process is terminated, another process will kick in and spawn the loader as a child process.

In most cases, the main payload will first be injected into a second instance of Explorer.exe: Betabot code injected into a second instance of Explorer.exe

However, in one of the incidents, we observed Betabot injecting itself into a McAfee process called “shtat.exe”: Once injected, Betabot will attempt to communicate with its C2 servers. Prior to that, it will check Internet connectivity by sending requests to the following domains (the “check_connectivity” function was renamed by the blog’s author): Once Internet connectivity is verified, Betabot will send requests to its C2 servers, as shown below:

Betabot utilizes several interesting persistence techniques. However, in the sample we analyzed, it used a classic registry Autorun:

It dropped a renamed copy of the installer in Programdata under the name “Google Updater 2.0” and changed the directory’s and file’s permissions and ownership to prevent them from being removed or tampered with. Once Betabot is executed, it make extensive usage of API hooking to hide the persistence from regedit, Sysinternal’s Autoruns and other monitoring tools.

A secondary persistence mechanism that was implemented via Windows Task Scheduler was also observed in some infections:

The code above will result in the following scheduled task command:

Betabot’s authors designed the malware to operate in paranoid mode. For example, it can detect security products running on a victim’s machine, determine if it’s running in a research lab environment and identify and shut down other malware that’s on a machine. These self-defense mechanisms are well advertised in hacking forums: Let’s explore some of these features:

Betabot will attempt to determine if it is executed in a virtual environment by querying the registry and looking for the names of virtual machine vendors such as VMware, VirtualBox and Parallels, as well as searching for specific drivers vendor files:

Another trick used to determine if the environment is virtual is to obtain a handle to \\Device\\Harddisk0\\Partition and \\??\\PHYSICALDRIVE0. This is usually done to calculate the size of the hard drive:

Betabot will check for the presence of Wine, which is often an indication of a sandbox environment:

Then it will proceed to search for product IDs of common sandbox vendors in the Windows registry by enumerating “SOFTWARE\Microsoft\Windows NT\CurrentVersion”: 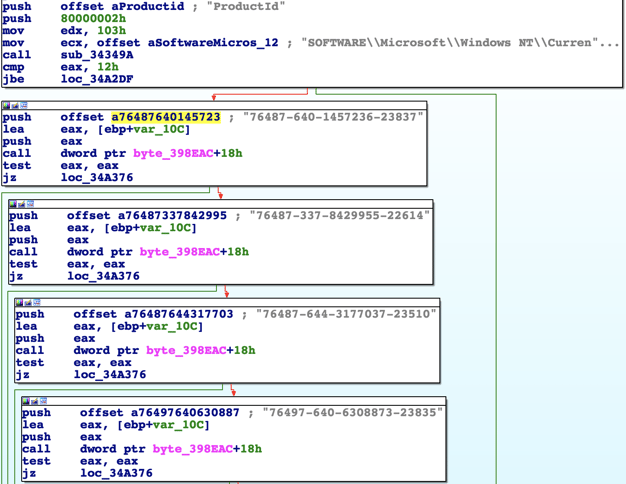 In addition, Betabot checks to see if the username matches any of the blacklisted common sandbox usernames, including “sandbox”, “sand box”, “malware”, “maltest” and “test user”. Betabot uses several techniques to ensure that it’s not being debugged and to prevent debuggers from attaching to its process, such as:

Instead of using the obvious IsDebuggerPresent API, Betabot will use the segment register to query the PEB structure (Process Environment Block) by calling “fs:[30h]” and then looking for the BeingDebugged flag (0x02).

Betabot will attempt to detect (and in some cases disable or remove) 30 different security products by looking for process names, specific files, folders, registry keys and services. Those products and vendors are:

Example of one of the functions that checks for the presence of antivirus vendors. Example of Betabot’s detection of Trend Micro artifacts on an infected host:

Betabot will attempt to block DNS requests to the following security vendors to prevent updates and other Web-related features that the products rely on:

In addition to it’s AVKiller module, Betabot will attempt to detect other bots and malware on the infected host by looking for common malware persistence patterns and other heuristic features. For example, Betabot will enumerate registry autorun keys in to look for suspicious-looking persistence indicators that are common in malware:

Here are some best practices to minimize the risk of infection:

2. Look for misspellings, typos and other suspicious content in emails and attachments and report any abnormalities to IT or information security.

Want to prevent these kinds of attacks?