The Cybereason Nocturnus Team has identified an active espionage campaign employing three previously unidentified malware variants that use Facebook, Dropbox, Google Docs and Simplenote for command & control and the exfiltration of data from targets across the Middle East. The full report can be downloaded here (ungated) and the Indicators of Compromise can be downloaded using the link in the header at the top of this blog.

In February 2020, Cybereason researchers reported the discovery of the Spark and Pierogi backdoors that were assessed to be part of targeted attacks against Palestinian officials. The attacks were attributed to Molerats (aka The Gaza Cybergang), an Arabic-speaking, politically-motivated APT group that has operated in the Middle East since 2012.

New Espionage Tools Developed by Molerats: Cybereason identified two new backdoors dubbed SharpStage and DropBook, as well as the MoleNet downloader, all of which can allow the attackers the ability to execute arbitrary code and collect sensitive data for exfiltration from infected computers.

Abuse of Facebook, Google Docs, Dropbox and Simplenote Platforms: The newly discovered DropBook backdoor used fake Facebook accounts or Simplenote for command and control (C2), and both SharpStage and DropBook abuse a Dropbox client in order to exfiltrate stolen data as well as for storing their espionage tools.

Political Phishing Themes: Themes used to lure the victims included the Israeli-Saudi relations, Hamas elections, Palestinian politicians as well as other regional events including a secretive meeting between His Royal Highness Mohammed bin Salman, Crown Prince of Saudi Arabia, the U.S. Secretary of State and the Israeli Prime Minister

Connections to Previous Middle Eastern Campaigns: The newly discovered backdoors have been observed being used in conjunction with the Spark backdoor previously attributed to Molerats. The attackers also used the new espionage tools to download additional payloads including the infamous open-source Quasar RAT that was used previously by Molerats.

Targeting Across the Middle East: The operation was primarily observed targeting the Palestinian Territories, UAE, Egypt as well as Turkey. Given the nature of the phishing content, Cybereason assesses that the campaign operators seek to target high ranking political figures and government officials in the Middle East. 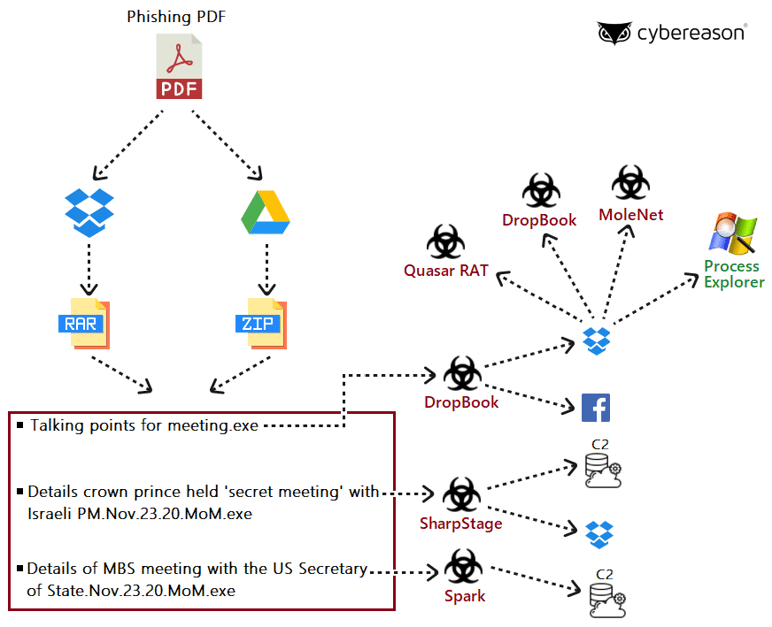 The full report, titled Molerats in the Cloud: New Malware Arsenal Abuses Cloud Platforms in Middle East Espionage Campaign, is available for download here. Open the chatbot on the lower right-hand side of this blog to download your copy of the Indicator's of Compromise, which includes C2 Domains, IP addresses, Docx files SHA-1 hashes, and Msi files.