The Quantum Locker is a ransomware strain that was first discovered in July 2021. Since then, the ransomware was observed used in fast ransomware attacks, in some cases even Time-to-Ransom (TTR) of less than 4 hours, leaving defenders little time to react.

The Quantum ransomware is another rebranding of the notorious MountLocker ransomware, which launched back in September 2020. Since then, the ransomware gang has rebranded its operation to various names, including AstroLocker, XingLocker, and now in its current phase, the Quantum Locker:

Same with other ransomware that follow the double extortion trend, that became already a second nature to ransomware, the Quantum Locker has its own data leak TOR website - “Quantum Blog”, and according to it the gang has over 20 victims, with 7 of them being new as of April 2022: 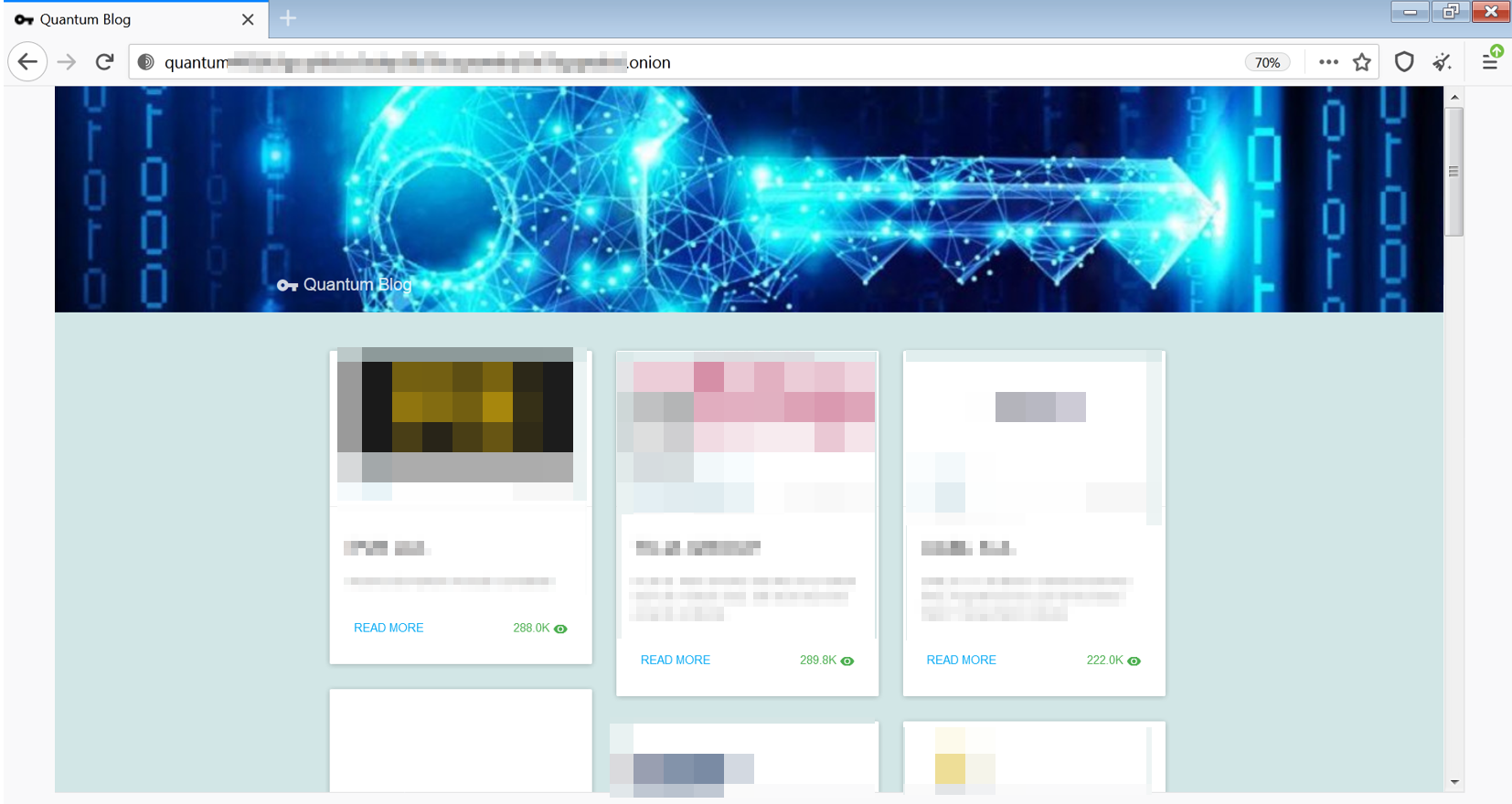 The ransom demands for the gang vary depending on the victim, with some attacks demanding $150,000 to receive a decryptor, while others are multi-million dollar demands, as shown below: The victim only gets 72 hours to get back in touch with the gang, and if not - the stolen data is shared on the website for free downloads for the public:

The infamous malware, IcedID, that started as a banking trojan back in 2017, is observed being utilized as the initial access by various ransomware gangs. Among those gangs are Conti, REvil, and the former brand of Quantum - the Xing Locker. As for now, the gang seems to continue with this method with the Quantum Locker as well; “If it ain't broke don’t fix it.”

The campaign of IcedID observed ending in Quantum Locker execution starts with a phishing attack via email. The email contained an .iso image file that contains the IcedID loader payload in the form of a DLL (dar.dll) and shortcut file - an .LNK file - that targets the IcedID payload and masquerades as a document.

When mounting the .iso file, the end user only sees the shortcut file named “document”, and the DLL itself is hidden. After the user clicks on the shortcut, the IcedID DLL is executed: 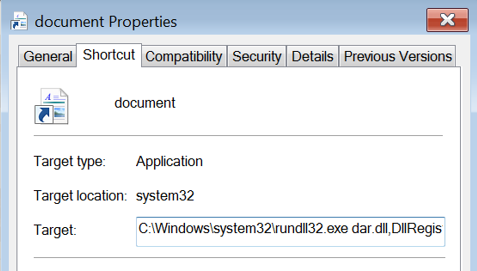 The unpacked DLL is loaded into memory (loader_dll_64.dll) and it begins its communication with the C2:

As with most commodity malware, for example TrickBot, IcedID executes initial discovery commands and then exfiltrates the results via the C2 channel. If threat actors find the organization to be of interest, they will launch the next phase:

Moving to an Interactive Attack

The next phase of the attack starts after IcedID sends the reconnaissance output back to the C2. In some cases, it started just two hours after the user clicks on the .lnk file. In this phase, the threat actor starts an interactive attack in the breached network. To do so, they use the initial IcedID implant to download and execute another implant. In most cases the gang used Cobalt Strike beacon to launch the interactive phase.

First, the threat actor wants to perform additional and more in-depth reconnaissance activity. They execute a script named adfind.bat that uses the tool AdFind to collect information about the Active Directory. In addition, they also run a batch script named ns.bat which runs nslookup for each host in the domain.

The AdFind.bat script is dropped in the %temp% directory, along with the AdFind.exe binary and 7Zip binary named 7.exe.  The output is saved into .txt files and sent to the C2. After that, the batch file removes tracks by deleting the script, the AdFind binary, the .txt files and the 7Zip binary: 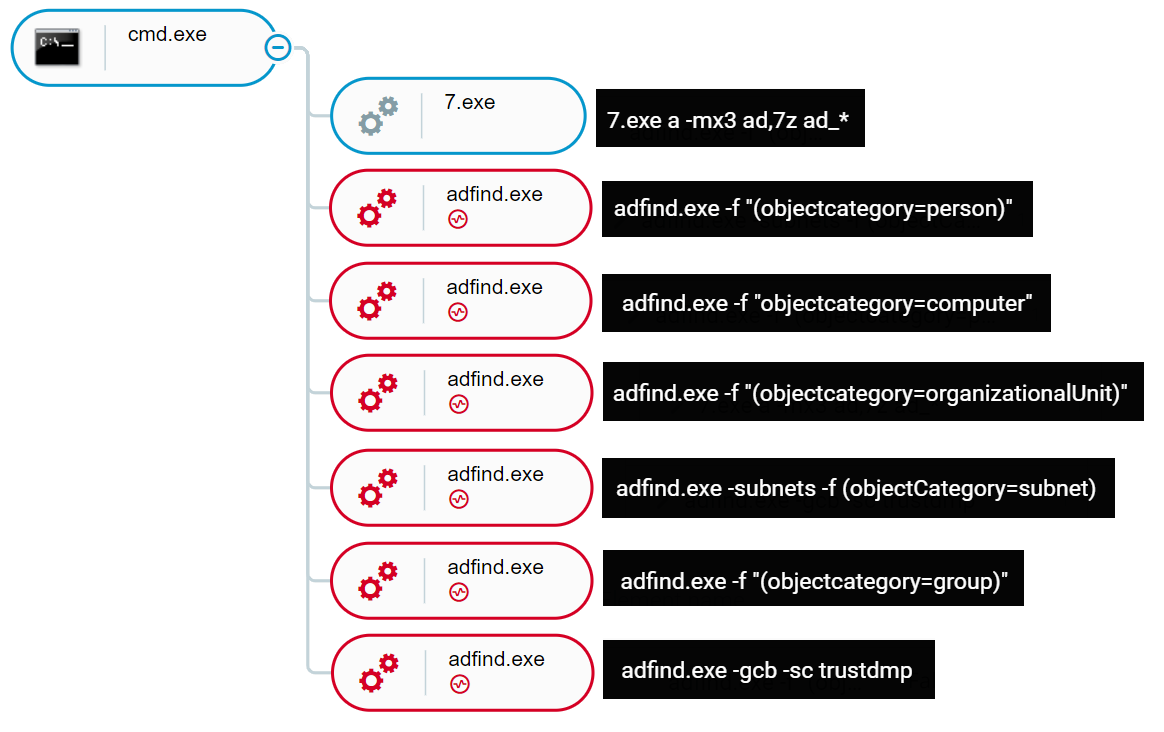 The execution of AdFind.bat, as shown in the Cybereason XDR Platform

To move laterally in the environment, the threat actor first dumps the lsass process and gains credentials.

Then, they start making RDP connections to other servers in the environment and remote WMI discovery tasks to test the gained credentials:

Evidence of credential dumping as shown in the Cybereason XDR Platform

After confirming that the credentials work, the threat actor continues to prepare for the deployment of the Quantum Locker. They start spreading in the network by copying the ransomware binary to the other machine's c$\windows\temp\ shared folder and then execute them remotely via WMI and PsExec.

Upon execution, the ransomware first checks for the presence of different services and processes related to security software such as AVs, malware analysis tools, Microsoft Office, browsers and databases. If found, the ransomware tries to kill the service / process:

Then, the ransomware starts its encryption routine. It encrypts the files on the disc and appends the .quantum extension to it. It also leaves a ransom note named README_TO_DECRYPT.html:

Files encrypted by the Quantum Locker 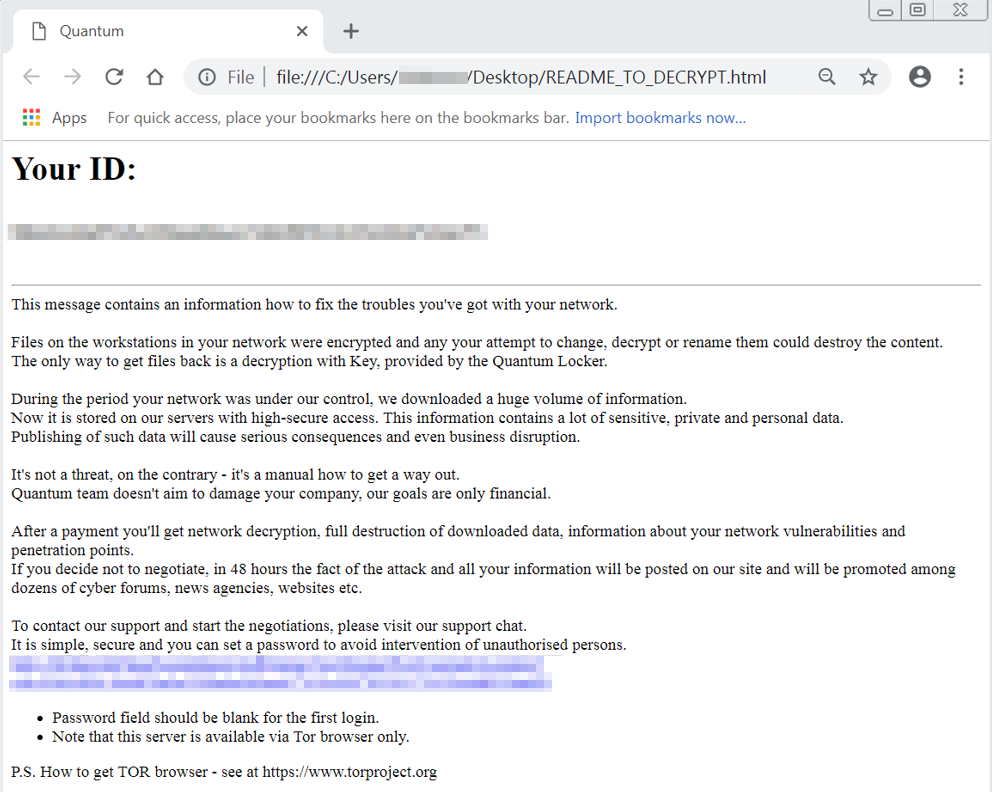 In addition, the ransomware creates a log file for its execution named <ransom_binary>.exe.log. This log file contains information about the machine, user, domain, killed processes and services, and each file's status - if it was encrypted or skipped.

The AI-driven Cybereason XDR Platform is able to prevent the execution of the Quantum Locker using multi-layer protection that detects and blocks malware with threat intelligence, machine learning, and next-gen antivirus (NGAV) capabilities. Additionally, when the Anti-Ransomware feature is enabled, behavioral detection techniques in the platform are able to detect and prevent any attempt to encrypt files and generates a MalOpTM for it:

MalOp for Quantum Locker as shown in the Cybereason XDR Platform

Using the Anti-Malware feature with the right configurations (listed in the recommendations below), the Cybereason XDR Platform will also detect and prevent the execution of the ransomware and ensure that it cannot encrypt targeted files. The prevention is based on machine learning, which blocks both known and unknown malware variants:

Cybereason user notification for preventing the execution of Quantum Locker 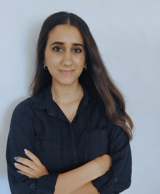